Prayer for the day

Holy God, ever-present with us, we are mindful of these times in which we live. Uncertainty, anxiety, and fear are present among us as we listen to and care for one another in these days.

We ask that your peace and healing presence be with us, as we pray for and hold each other in love. We ask your guidance and direction as we live out your command to love one another as we are called to love you.

In the name of the one who has called us and prepared us for these challenging days, we pray. Amen.

“[T]he hour has come. The Son of Man is betrayed into the hands of sinners. Rise, let us be going; see, my betrayer is at hand.”

And immediately, while he was still speaking, Judas came, one of the twelve, and with him a crowd with swords and clubs, from the chief priests and the scribes and the elders. Now the betrayer had given them a sign, saying, “The one I will kiss is the man. Seize him and lead him away under guard.”

And when he came, he went up to him at once and said, “Rabbi!” And he kissed him.

And they laid hands on him and seized him. But one of those who stood by drew his sword and struck the servant of the high priest and cut off his ear.

And Jesus said to them, “Have you come out as against a robber, with swords and clubs to capture me? Day after day I was with you in the temple teaching, and you did not seize me. But let the Scriptures be fulfilled.”

And they all left him and fled.

One of my favorite memes of late is a still frame from The Fresh Prince of Bel-Air with a caption that reads: “He a little confused, but he got the spirit.”

It’s used to respond to people who have a lot of really great enthusiasm, but who completely miss the point.

Here are a few examples (clicking on an image will enlarge it): 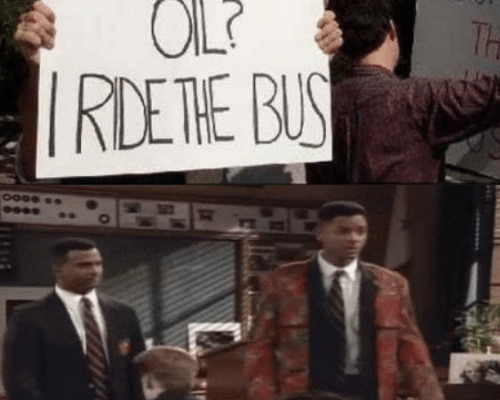 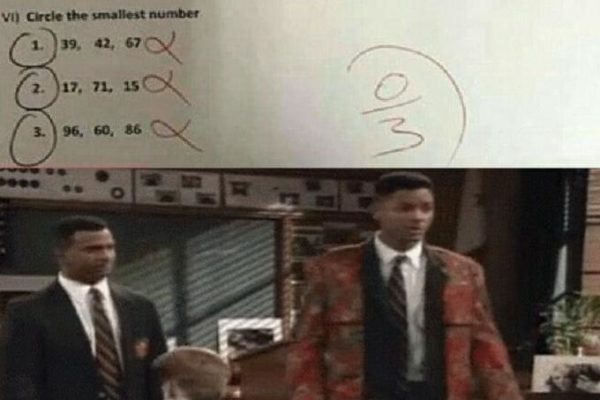 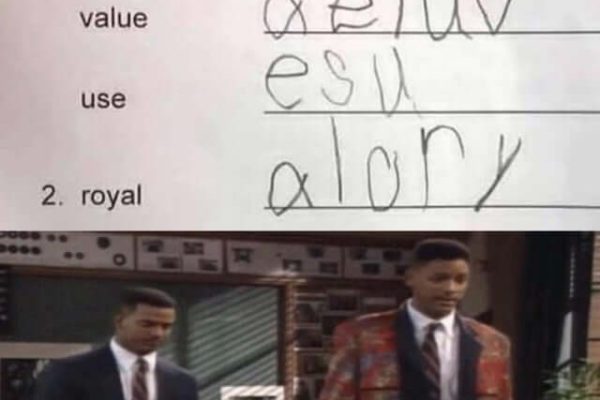 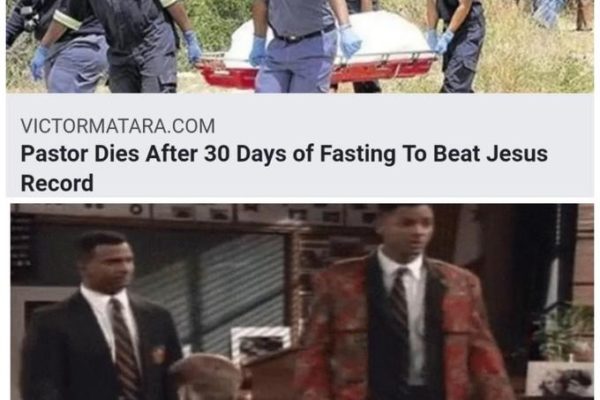 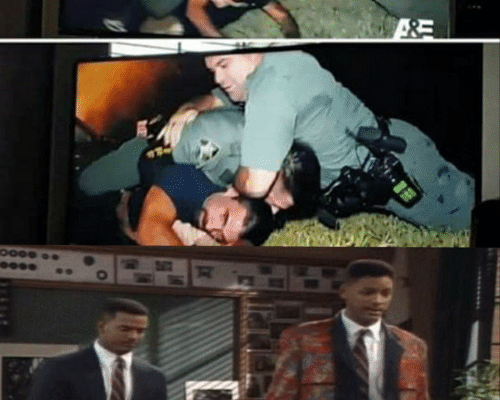 He a little confused, but he got the spirit.

That’s the perfect way to describe the guy in today’s story that comes to Jesus’ defense by grabbing a sword and lobbing off someone’s ear with it. Out of love for his teacher, he sprang into action, ready to fight to the death for Jesus and for the new world order that he represented.

This guy’s got a lot of great enthusiasm, to be sure;  but he’s missed the point of Jesus’ ministry completely!

Just like the armed mob that comes to arrest Jesus, this guy is under the impression that the Son of God is getting ready to lead a bloody revolt against Israel’s Roman oppressors.

Jesus recognizes this and, per usual, doesn’t hesitate to point out how wildly off base they all are. He says to the mob: “Have you come out as against a robber, with swords and clubs to capture me? Day after day I was with you in the temple teaching.”

In other words: “All I’ve been doing these past three years is living a life of service and humility: teaching and healing, exorcising a demon here and there. And now here you fools are acting like I’m some sort of samurai warlord!”

So we have this guy who dearly loves Jesus and we have this mob who deeply fears Jesus, and BOTH have completely missed the point of Jesus’ ministry. While their motives could not be more different, BOTH embrace methods and take actions that fly directly in the face of everything that Jesus lived (and would soon die) for.

It turns out, even if you’re doing something out of a deep love for Jesus, it doesn’t mean that you’re doing the right thing.

Just think:  Last year, 300,000 American youth were either turned out onto the street by parents who disapproved of their sexual orientation or gender identity OR they made the calculated decision that sleeping on the streets was a safer alternative to staying at home because of the abuse they suffered at the hands of parents who took issue with their orientation or identity.

And, as you may have guessed, the vast majority of these kids were turned out of Christian households.

Now, I do not doubt that most of these Christian parents are people of sincere faith. No doubt they have a deep love of God and do their best to follow Jesus. But just because you do something out of love for Jesus doesn’t mean you’re doing the right thing. Much like the man in today’s story, they’ve managed to miss the point of Jesus’ ministry and miss it in a very big way. They took a gospel of love and radical inclusion – a gospel that Jesus both lived and  preached – and they transformed it into something very, very different.

As our meme might put it: They got the spirit, they just confused.

But for every heart-rending story and statistic about the ways we find to veer wildly from the path Jesus has laid before us, there are just as many stories about those who get it right. Stories about people who got the spirit and aren’t confused. After a week like this past one, we need these stories to encourage us for the days ahead.

So I offer you the following. Not only is it a story about someone’s who spirit and actions beuatifully align with the love and compassion of Jesus, but it’s also a story about a relative of one of Hillside’s members. It’s from a 2007 Boston Globe article by Kevin Cullen titled, “A Gift for Compassion.”

May you be blessed by this story of someone who got it right:

It’s a long drive up from the Cape, but Mary Quin does it without complaint. Eddie is her oldest, her baby, and she loves him the way only a mother can love her firstborn.

Eddie is 50 years old, mentally retarded, and smarter than a lot of people. He lives in a group home in Wakefield and works as a janitor at a workshop in Woburn.

Mother and son have a little tradition this time of year. She picks him up, they have lunch, and she takes him to the stores, so he can buy Christmas presents for his brother and sisters.

They were sitting in the China Moon, in Stoneham, waiting for their lunch, when Mary noticed Eddie wasn’t himself.

“I seen it on TV, Ma,” he said. “There was a fire, in Everett, and everybody’s house got burned up. There was an oil truck and it crashed and it burned.”

Eddie couldn’t stop thinking about the people in Everett since he saw it on the news.

Mary Quin told Eddie that it wasn’t clothes that the people in Everett needed. She had heard they needed other things, like money and gift cards.

Eddie thought for a moment. Then he pulled a dog-eared bank book from his back pocket.

At the bank in Wakefield, Eddie told the teller he wanted a check for $25. The teller said she could give him an American Express check, but that it would cost a few dollars extra for the check.

“What do you want the check for?” the teller asked.

And so Eddie told her and then the teller walked over to the bank manager. When the teller came back to the window she told Eddie she wouldn’t charge him for the check.

Mary Quin called a telephone number that had been set up to help the people who got burned out in Everett. After she explained what her son had done and that they didn’t know where to bring the check, the guy on the other end of the line didn’t say anything for a while. Then he asked Mary to wait for a week and to bring Eddie to the Everett Recreation Center at a certain time. Mary asked why they had to wait a week and the guy said he needed to talk to some people first.

So a week went by and Mary drove back up from the Cape, to Wakefield, to get Eddie and they headed to Everett. Mary took Eddie to Sweetser Circle. They got out of the car and stood in front of some rubble that used to be the homes of 13 families.

Eddie turned his head from side to side. He didn’t say anything for the longest time. It was freezing.

“Eddie,” Mary Quin said, turning to him, grabbing his arm. “Don’t you remember? Nobody died. Nobody at all died. It was a miracle.”

Eddie handed the check to Carlo DeMaria, the mayor-elect, and DeMaria shook his hand, and then Eddie looked up and realized everybody was looking right at him. He knew he had to say something, and so he said the only thing that felt right.

Prayers of Our Community

Please take a moment to pray for the following joys and concerns of the Hillside Community.
When you submit a prayer request, it will be automatically added to the list below.