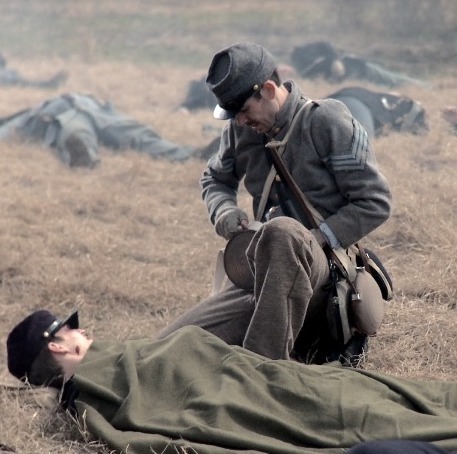 In December of 1862 the Civil War was tearing our country apart. At the Battle of Fredericksburg there was a young Confederate soldier by the name of Richard Kirkland; he was just a country boy from South Carolina. Kirkland was sitting this day behind a low-slung stonewall that meandered through town as it followed the main road. He and his fellow soldiers were armed with Springfield rifles. Like all good soldiers, they were prepared to shoot the enemy on command. The “enemy,” of course, had until recently simply been their neighbors to the north.

I suspect that Kirkland and all his comrades would have been considerably happier to be back home this December, maybe shooting squirrels so their moms could make Brunswick stew. Or getting ready to celebrate Christmas with their families. Instead, however, here they were, cold, hungry, so very young, and not at all innocent of the horrors of war.

On this fateful day in Fredericksburg, General Ambrose Burnside was in charge of the Union troops. He ordered his men to go up a certain hill to engage in combat. It just happened that this maneuver placed the Confederate army in a dramatically superior position. So wave after wave of Burnside’s Union soldiers got mowed down as they advanced toward their Rebel opponents. When the guns finally fell silent at the end of the conflict, almost 19,000 soldiers lay dead or dying. Thirteen thousand of them were Union soldiers who lay sprawled on the other side of Kirkland’s stonewall.

All around him, Kirkland could hear the moans and cries of his dying enemies. These were young men just like himself. But now they were mortally wounded, and they croaked out their desperate need for a sip of water.

What Richard Kirkland chose to do next incarnated Christ in the midst of this slaughter. Crawling around in the carnage, Kirkland collected all the canteens he could manage to carry. Then he climbed over that stonewall into the dying masses of Union soldiers. And he gave them water to drink.

Imagine what those moments must have been like. How Kirkland probably listened to hasty confessions. How he likely had notes and memorabilia pressed into his hand to send off to wives and girlfriends who were anxiously waiting up North. Surely he must have locked gazes with some of these men whom he held in his arms, men who were supposed to be his enemy, as he watched them die.

This tender act of compassion by Richard Kirkland is, to me, a powerful representation of what it means to be yoked to Jesus. God has purposes for every one of us, and those purposes are made to our unique measure. Jesus never asks us to do the impossible; he does ask us to do what we are able to do.

The yoke is an ancient symbol. It represents toil, discipline, and submission for both draft animals and human beings. But in Jewish literature the yoke has also signified freedom and life. You can find references to the yoke of serving God, the yoke of the law, and the yoke of the commandments.

A yoke like that, when it’s laid upon you, is meant to strengthen you, uphold you, and inspire you. Interestingly, however, nowhere in Jewish literature is there any reference to being yoked to Moses, for example, or any other great leader. No teacher invited others to put on his yoke.

Only Jesus. “Take my yoke upon you,” he says. “For my yoke is easy to bear, and the burden I give you is light.” “Easy” doesn’t mean that Jesus makes fewer demands on us. Instead, easy refers to the fit of the yoke. Jesus treats us as yokefellows. That means we share a yoke with him. With him! Picture it. When we’re yoked to Jesus, we are standing beside him. We are looking in the same direction. And feeling the strength of his presence, we begin to see the world through his eyes. We perceive that God’s Spirit saturates all creation. That, in truth, all of us are bound together by a fundamental unity. As one commentator puts it, the demands of Jesus “grow out of our [own] need. [Because] hate is a greater burden to bear than love. Forgiveness lightens the load.” Hate is a greater burden to bear than love.

Forgiveness lightens the load. Didn’t Kirkland, with his precious canteens of water, embody this truth?

Jesus calls us to live out a unity in our lives that’s no less radical than crawling into the aftermath of a raging battle. Taking his yoke on ourselves doesn’t mean there’ll never be any tension or struggle or pain in our lives. We will, however, be given strength and sustenance and holy companionship for our journey. The more intentional we are about being yoked to Jesus Christ, the more we’ll find ourselves becoming compassionate as he was. Not dwelling on our differences as much as delighting in our common humanity.

A friend of mine recently commented that if feels like our country is on the brink of another civil war. I understand what she means. I don’t remember a time when the political divide among us seemed so gaping, so angry, so hurtful. If ever there was a time to remember all we hold in common it is now. If ever there was a time to remember the Spirit’s call for Christ’s people to be signs of unity in diversity that time is now.

The news is depressingly full of the divisiveness that threatens our nation. Two public figures have recently handled this divisiveness in very different ways. When Senate Majority leader Mitch McConnell was recently asked to comment on the idea of making monetary reparations for slavery in this country, this was his answer: "I don't think reparations for something that happened 150 years ago for whom none of us currently living are responsible is a good idea."

And yet . . . don’t we honor treaties that were signed long before we were born? Don’t we pay pensions to the heirs of soldiers who fought in wars that are long in the past? Every Good Friday don’t we ask forgiveness for the terrible miscarriage of justice that was Jesus’ death because we know deep in our bones that it is collective human sinfulness that led to his crucifixion?

As McConnell distanced himself from any accountability for slavery, New York City Police Commissioner James O’Neill took a different tack in handling our country’s divisiveness. He chose to deliver a formal apology on behalf of the Police Department for the 1969 raid on the Stonewall Inn. That police raid on the gay bar in Greenwich Village galvanized the modern gay rights movement. Asked why he made this apology 50 long years later, O’Neill explained that no one should be arrested simply because of their identity. “If we’re going to move forward,” he said, “the past has to be acknowledged.”

Which one of these men do you think contributed to healing the world? Which one showed the courage to acknowledge the prejudices, indifference, and fears that cause us to treat huge groups of humanity as second class human beings?

Do you and I have the courage to take stock of our prejudices, indifference, and fears? Do we dare accept the invitation of Jesus to embrace his yoke? Can we see our unity? Can we celebrate that we are the rainbow of God’s beautiful diversity?

After the Battle of Fredericksburg, Richard Kirkland continued to serve in the Confederate Army. He didn’t survive the Civil War, alas; toward the end of the following year he was killed in the Battle of Chickamauga. He’s buried in an old Quaker cemetery in South Carolina. The grave is an unpretentious marker that lies in the shadow of one of those magnificent live oaks that thrive so majestically in the south. Two tattered flags stand sentinel. One is the U.S. flag. The other is, somehow appropriately in this case, the Confederate. The gravestone reads,

“Richard Kirkland
who distinguished himself at the Battle of Fredericksburg
by taking water to dying Union Soldiers.”

Beneath that inscription are carved words that are the heart of the yoke of Jesus:

“My enemy was thirsty, and I gave him drink.”

May you and I learn to wear the yoke of Jesus as a second skin. And may we help to heal our world! Amen.