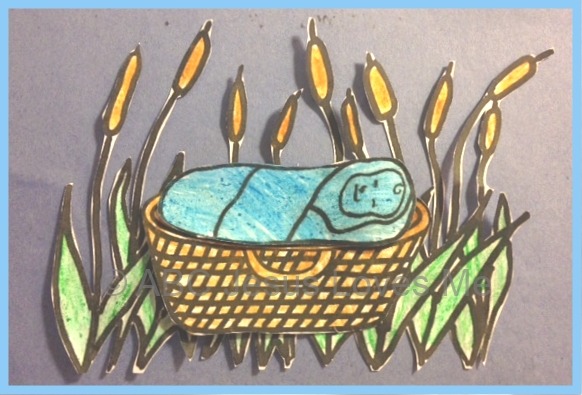 An Ark in the Reeds

There arose a Xenophobic Pharaoh who dreaded the Hebrews, Joseph’s descendants, every day, even as these immigrants built the Egyptian cities and tilled the farmlands under a heavy hand of oppressive and forced labor, doing work few if any of the Egyptians themselves would do. There arose a Pharaoh who feared that no matter how harsh he was, the immigrants would become more powerful and numerous than the Egyptian natives and would overcome them and bring the culture to ruin and demise. Every day Pharaoh feared Egypt would lose its demographic integrity, its native supremacy. Finally, Pharaoh, in a mad fit of fright and frustration gave the order, “Every boy that is born to the Hebrews you shall throw into the Nile.”

The Nile River, the lifeblood of Egypt, this river Pharaoh made into a charnel bed, a place of death. Into the river whose floods overspread the land every year and brought fertility and abundance to the Egyptian fields, into this river this Pharaoh without so much as a thought about murdering innocent children or of families which would be wracked with grief, this Pharaoh ordered the Hebrew infants to be thrown in the river to die.

Into this grotesque, grim hour was born the Hebrew infant Moses. Stop. Slow down. Linger here for a moment. We can easily, too easily, rush to the resolution of the narrative. We know the story. We know Moses. We know how he meets God at the burning bush; how he leads the Israelites safely through the parted Red Sea waters; how he ascends Sinai and carries down the tablets of the Law; how he wanders with his cantankerous and stiff-necked people for forty years in the wilderness; and how just before he dies, he peers from Mount Nebo into the Promised Land. We can easily hasten in our mind’s eye through the details of today’s grim chapter and move to a happier ending, too easily.

The Hebrew Bible asks patience of us. It asks us not to hurry too quickly away from this painful moment that at first glance is of secondary interest or distracting. The text wants us to reside for a while in this deceptively simple narrative. It wants us to excavate barely hidden echoes of the primordial past and subtle hints of the liberation to come. It wants us to appreciate layers in the drama and their immense consequence. It invites us to fathom what the story points to and what it intends to gather up into an improbable triumph.

“Now a man from the house of Levi went and married a Levite woman. The woman conceived and bore a son.” The tone is matter of fact. We don’t even hear the couple’s name.

Just another Hebrew family. Just another newborn boy to drown in the Nile. It goes on, “But when [the mother] saw that he was a fine baby, she hid him three months.”

There is an old Italian saying: Traduttore, traditore. Translator traitor, or, to translate is to betray. The mother saw that he was a fine baby—a perfectly adequate translation in one sense. More literally though, the text says simply, “She saw that the baby was good.” Suddenly Genesis volleys with our text. Using the exact same vocabulary and grammatical construction—God looked upon creation and saw that it was good—Moses’ mother looked upon her baby and saw that he was good. The Hebrew Bible doesn’t traffic in accidents, unintended coincidences. The text requires us to relate the good baby and God’s good creation.

Dare we say that we are required to correlate God, who sees the goodness of creation on the one hand with Moses’ mother, who sees the goodness of her son on the other? It’s dangerous ground, I know, to think of her like God. After all, the serpent’s ruse in Eden was just such an offer. The serpent told Eve, “God knows that when you eat [the fruit of the tree] your eyes will be opened, and you will be like God, knowing good and evil.” There’s that same thought again, perceiving good.

Most Biblical theologians will say that Adam and Eve took a bite of the apple driven by desire to be like God. They desired to become wise. But their problem was a bit more subtle than that. Lured by the serpent, they wanted to grasp the wisdom and power of God for themselves, to own it for their own selfish purposes. They wanted to put themselves in the center. They wanted to replace God in a way. As Luther said, “Their hearts became turned in upon themselves.” Once they bit the apple, Adam and Eve had no love for creation except as a thing to be possessed.

Moses’ mother behaved quite differently. When she saw that her son was good, she thought not of herself. Instead, in love, she thought to protect the child at great risk to herself. She hid the baby for three months in defiance of Pharaoh’s edict. Moses’ mother is a direct counterexample to Adam and Eve.

For whatever reason, after three months, hiding the infant at home became untenable. So, Moses’ mother made a papyrus basket for him. Here comes that traitorous translator again. Literally, the text says that Moses’ mother made a papyrus ark for her son. It surely wasn’t an ark of many cubits like as Noah’s, but she made an ark. This ark and the one that Noah built are the only places in all the Bible that this word is used. As before, the use of this word is not an accidental coincidence. Moses mother made him an ark. Like Noah’s, it was to be an ark of salvation. As Noah’s ark saved humanity, this tiny papyrus ark saved the Hebrew people.

Then Moses’ mother made a curious, maybe brilliant, choice. She placed the ark-basket into the very river where Pharaoh ordered the Hebrew children to be drowned. Why did she do that? Was it the one place no one was likely to look? Was it an ironic act, obedient disobedience? Did she “accept” Pharaoh’s death sentence and place her child in the river, but with a caveat? Whatever the reason Moses’ mother had for placing the child in the reeds along the Nile, just as Noah’s ark provided safety on the treacherous waters of the flood, Moses’ ark provided safety in the treacherous waters of Pharaoh’s evil intentions.

Another pointer in this salvation narrative also emerges here. Moses’ mother placed the ark among the reeds on the bank of the river. Once more we must contend with the traitor- translator. Much later in the story, as a grown man, Moses will lead the people through the Red Sea, as the NRSV translates it. But the Hebrew text is better translated as ‘Sea of Reeds.’ If you look at your Bibles at Exodus 13:18 you will see that a footnote admits it should be translated that way. Centuries of Bibles and Bible maps show the Israelites crossing the Red Sea. But the Hebrew text says Sea of Reeds, and that’s important. The reeds in which Moses’ mother finds safety for her baby foreshadow the Sea of Reeds through which the man Moses will lead the people to liberation. The basket was placed in the Nile among the reeds, where the Hebrew children were to die, but Pharaoh’s plan was thwarted. Later the Sea of Reeds against which Pharaoh thinks he has the Hebrews trapped, will become the salvation of the Israelites and the doom of Pharaoh’s powerful army.

We know the story so well that it is a little difficult to fully grasp how unlikely what happens next was. Pharaoh’s daughter looked upon the child with compassion. A realist would find the story line unbelievable, a fairytale. Not only was the child saved from death by Pharaoh’s daughter, she paid Moses’ own mother a salary to nurse her own child, and when the boy grew up, Pharaoh’s daughter adopted him. The boy who was supposed to be drowned was protected by his mother in defiance of Pharaoh’s command, placed in a tiny ark in the very place he was supposed to be drowned, among reeds that foreshadowed the Exodus. He was saved by Pharaoh’s daughter, and ultimately became Pharaoh’s grandson, but then led a rebellion and saved his people. The ironies are countless. The twist and turns are fantastic. No publisher in the land would buy it. It’s just too farfetched.

Oh, but what a story! Pharaoh, the powerful and narcissistic yet fearful ruler, sought to maintain the purity of his nation. He was desperately willing to do anything, no matter how unprincipled and cruel, to try. Yet his efforts created chaos, not only for the Hebrews but for the very nation he pretended to protect and for him himself. Pharaoh was everything God worried about in Eden—that human beings could turn knowledge and power into a cataclysmic inferno fueled by self-absorption and vainglory. One reading of the creation story in Genesis says that God took chaos and molded and shaped it into beauty and life and pronounced it good. God’s fear was that self-centered, power hungry human beings would reverse the work.

In our story this morning, though, we also find another possibility. In a time marked by chaos, fear and attempted genocide two women looked kindly upon the vulnerable infant Moses. His mother was one, and she saw that the child was good. Pharaoh’s daughter, the other, and she was filled with compassion. It is not a stretch to say that they both beheld the child with the mind of God. Neither woman was burdened with a long-range plan to control destiny. Neither placed herself at the center of her own universe. Neither was driven by dreadful self-absorption. Instead they both were moved by love and compassion. Now, to be honest, neither had any idea what she was doing or expecting in the long run. What did Moses’ mother think she would accomplish by hiding her child at home for three months and then floating him in a miniature papyrus ark in the Nile? How did Pharaoh’s daughter’s think saving the Hebrew child and later adopting him was going to fit into the future of the royal family? Neither knew.

Pharaoh’s daughter clearly had more power and privilege than Moses’ mother, but neither woman was motivated by power or privilege. In a dangerous and politically charged environment it is extraordinary that both women saw with such clarity what was good and right and acted with care and concern, even when they could not know what the ultimate result would be. It is extraordinary that moved only by love and compassion, they acted—no hesitation, no prevarication, no calculation.

Maybe this is why we are to linger over these few verses. This convoluted, unlikely plot; the markers the text gives to the reader—the echoes of creation and the flood and the ark; the pointers to the Sea of Reeds—none of these were premeditated by Moses’ mother or Pharaoh’s daughter. Their role was to respond to what appeared before them with love and compassion. The complicated plot was God’s to work out, and I like to think God found some pleasure in God’s own narrative imagination and storytelling. And, as it turns out, of course, God did get the story published. It’s a perennial best seller, too.

For our own part, as its readers, can we but stand in awe at what the simple actions of these two women set in motion? Their actions and the results stand in remarkable contrast to the efforts and failures of the Pharaoh who knew not Joseph. Amen.