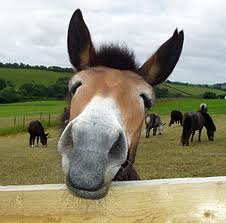 I think we can all agree that, here at Hillside, we are all about edification.

Mind, body, and spirit. We aim to educate, uplift, and inspire. Amen?

It is in this tradition of edification, then, that I would like to begin today by introducing a phrase that will be new to most of us. Those of you who were in Rev. Bergstresser's bible study class might remember it. Should remember it. I guess we'll see how well you were paying attention...

The phrase is hapax legomenon. It comes from Greek and it means, "something only said once."

As it relates to scripture, a hapax legomenon is a word that occurs only once in the Bible. This makes its meaning extremely hard to figure out. We can't compare and contrast the way its used in different contexts.

And, what do you know! Our focus verse this morning – the seemingly straightforward, Give us this day our daily bread – this simple little verse contains one of these hard-to-figure-out words.

When Jesus originally taught his disciples the Lord's Prayer, it's believed that he was speaking to them in Aramaic. 50 years or so later when the Gospel writers were trying to capture the essence of his words in Greek, they may have felt it necessary to coin a new word to do it!

What biblical scholars all do seem to agree on, is that the translation that we know and love – Give us this day our daily bread –this translation is the least likely to be correct.

Fear thee not, there are a number of contenders ready and waiting to take the place of daily.

The top three contenders are as follows:

The first is: Give us this day the bread necessary for existence. This is an old, old translation. It comes to us from a theologian named Origen just 150 years after the Gospel of Matthew was written.

The second contender is: Give us this day bread for tomorrow. This is also an old translation. It comes to us from a theologian named Jerome about 300 years after the Gospel of Matthew was written.

The third most likely contender to take the place of daily is: Give us this day the bread that doesn't run out. This translation is a recent one but was arrived at by looking at the earliest translations of the Greek text into other languages.

Regardless of the translation we end up using: whether we pray for daily bread, bread that's necessary for existence, bread for tomorrow, or bread the doesn't run out. The heart of this part of Jesus's prayer is about going to God for those things that which is most basic to our lives. After bread. Food. After water. The list of things we need to live drops off pretty sharply.

This is kind of interesting because when we go to God in prayer we usually concentrate on our upcoming job promotion.

When we go to God in prayer we usually concentrate on our current health issues.

When we go to God in prayer we usually concentrate on current world events.

That is as it should be.

To be sure, praying for small things in this way has a big effect on our lives.

And when we begin to recognize things big and small as gifts from God, we begin to cultivate in ourselves a deep sense of gratitude. Like a flower toward the sun, our lives are opened up by a sense of thanksgiving. We are able to love more, share more, care more because we realize how abundantly each of us has received from God.

We're not self-made. Even our bread has come somewhere. And so we are thankful.

What does a life of deep gratitude look like? We need look no further than a classic song by Shirley Caesar, one of the mothers of gospel music. It's a song called Hold My Mule. Has anyone heard it?

I'm going to tell you about it, but it's also going to post up onto our Facebook page after service. It's an amazing song. You should definitely get on and check it out.

Hold My Mule tells the story of an 86-year-old man named John, who joined a spiritually dead church.

From the moment he joined John disturbed the whole congregation. He would come in singing, shouting, and dancing. As the sermon was being preached he would dance his way through the pews and around the sanctuary. Everyone raised their eyebrows in disapproval.

The deacons decided that something had to be done. So they drove out to John's place in their fine cars - their BMWs and Saabs and whatnot.

As they pulled up to John's ramshackle house, they found him out plowing a field behind an old, beat up mule. They walked out to talk to him.

John said, "Well, then you're going to have to put me out. Because I can't hold my peace. Let me tell you why."

"But you don't want me to shout in your church."

"But you don't want me to dance in your church."

"But you don't want me to sing or shout or dance in your church."

"Well, deacons, if you don't want me to shout and dance in your church" – and this is where the song's title comes from – "hold my mule, because I'm gonna sing and dance and shout and give thanks to God right here!"

Old Shoutin' John, as he's known, gets the point of today's scripture. He goes to God in prayer for everything, everything everything. And so he recognizes his whole life as the gift that it is and can't help but give God thanks.

God's graciousness towards us is boundless. Our gratitude should be likewise.

And so, I leave you with this blessing:

May neither your prayers nor your gratitude for even the small things in life be a hapax legemonon, something said only once.

But may they be so effusive, may they be so overflowing, that you need someone to hold your own mule because you can’t keep from shouting them out loud.

Topics: Prayer
« Your Kingdom Come A Long-Handled Spoon »
At the end of the day, it's all about love Learn More