Who is Edwin Landseer?

Edwin Landseer was one of Victorian Era’s most renowned artists.

Born in London in 1802, Landseer showed great promise as an artist from even a young age. He studied under the mentorship of first his own father, an engraver, and then later under history painter Benjamin Robert Haydon.

Proving somewhat of a prodigy, Landseer had his first showing at the Royal Academy of Arts when he was just 13 years old. As a young man, he was hired on several occasions to do portraits for the English royal family. He is likewise known to have given drawing lessons to both Prince Albert and to Queen Victoria herself. In fact, Landseer became Queen Victoria’s favorite artist and so was honored with a knighthood in 1850.

What are Edwin Landseer’s most famous works?

Edwin Landseer’s mentor, Benjamin Robert Haydon, encouraged him to perform dissections on animals in order to better understand their musculature and skeletal structure. This foray into the world of animal anatomy paid off – it was his renderings of dogs, horses, stags, and even lions that became his best known works.

You can see four of Landseer’s most famous works in the gallery below: 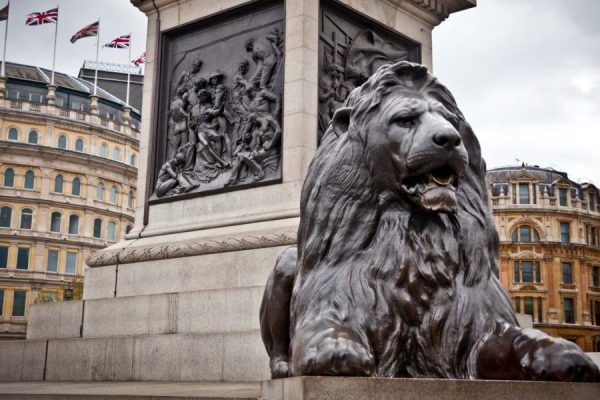 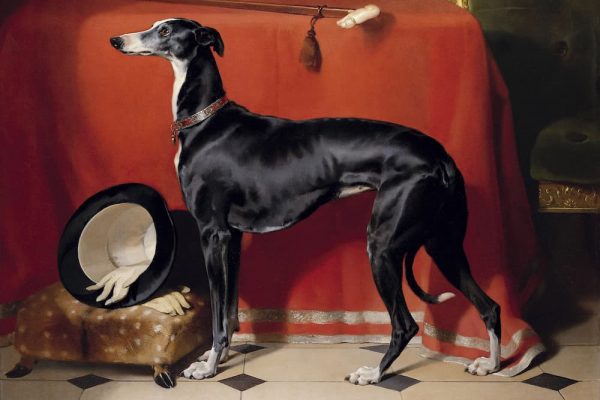 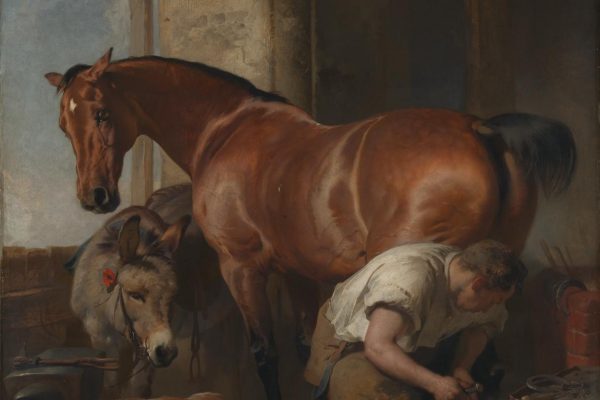 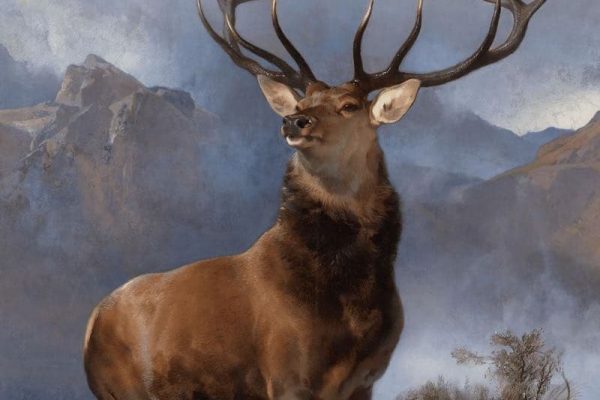 What else is Landseer known for?

While Edwin Landseer is best known for his masterful depictions of animals, he was something of a savant in another area as well: wall art. More specifically, creating art out of the stains and blemishes he found on walls. We have two reported accounts of his having transformed something unwanted and unsightly into something beautiful.

On one occasion, Landseer stopped at an inn for food and lodging while traveling in Scotland. As he ate dinner, a fisherman and his friend sat at the next table telling each other stories. In the middle of one of his stories, the fisherman gestured enthusiastically just as a woman passed his table carrying a pot of tea. The fisherman accidentally hit the teapot, causing tea to splash against a newly whitewashed wall. It left behind a dark stain. The fisherman was embarrassed and apologized profusely to an innkeeper furious that his freshly painted wall was ruined.

Landseer stood and offered a solution. “I think I might be able to do something with this stain,” he said. He went to his room and retrieved some ink and a brush. He then proceeded to rework the stain into a drawing of a regal stag. Part of the splashed tea became antlers. The main part of the stain became the stag’s body and legs. The artist then added trees and the grass of a meadow. When he had finished, the ugly stain had been transformed into a scene of beauty and majesty. 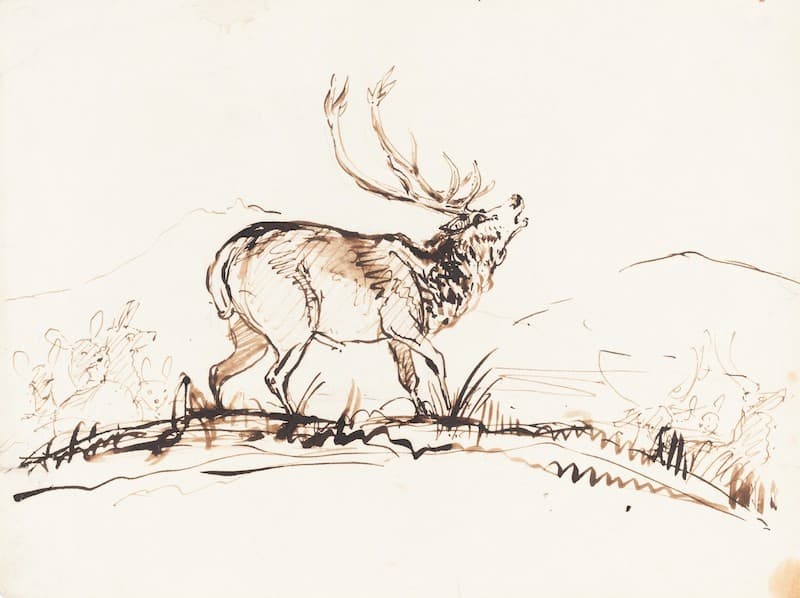 On another occasion, Landseer was at the mansion of an old, aristocratic family in the Scottish Highlands. One of the rooms of that mansion had walls that were filled with sketches made by the various distinguished artists who had spent the night there. While looking at the other artists’ work, noticed a light brown soda stain on the wall. Rather than giving the family just another sketch to add to their collection, Landseer decided to do something different. This time using charcoal instead of ink, he set to work creating a piece of art directly on the wall. The outline the soda stain became a beautiful waterfall, bordered by trees and the Scottish wildlife that he was famous for. Once again, Landseer had transformed an unsightly stain into a masterpiece. 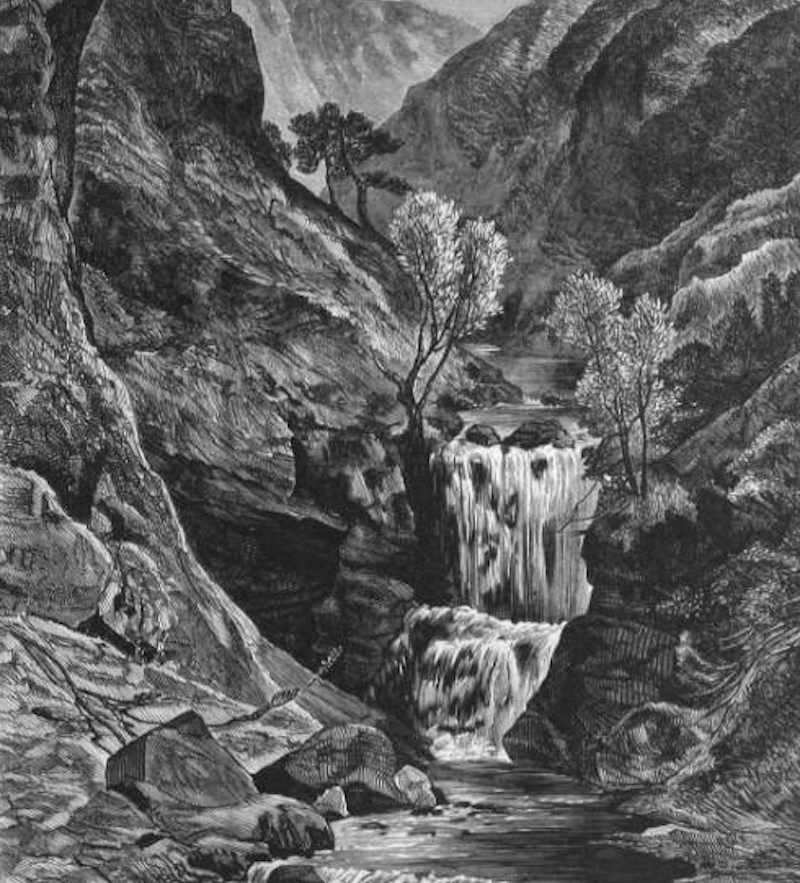 What does Edwin Landseer have to teach us about God’s love?

Just as Edwin Landseer had a penchant for transforming stains into masterpieces, so too does God!

When God looks at the “wall” of our life, God sees every last stain and blemish, every last ding and dent. But, rather than tearing down that wall for its unsightliness, God breaks out the ink and the charcoal pencils and transforms those stains and blemishes, those dings and those dents into a new masterpiece.

How does God do that?

The process begins when we recognize that we are unconditionally, irrevocably, ridiculously loved by God just as we are – dings and all! Standing in that love (in the church we call it “grace”), less and less are we defined by our past mistakes and traumas. More and more, are we defined by the love in which and for which we were made. More and more, are we able to act in love towards others. With time, with patience, and with practice, our lives are transformed into new masterpieces.

This Southernism offers us a great way to think about forgiveness.

The Gospel According to Winnie the Pooh

Outward shows of piety don't matter. What's in your heart does.