If you were alive on January 14, 1987, then, right after you were done getting ready for the day (no doubt feathering your hair, putting on some Jordache jeans, and pulling on a single leather glove à la the king of pop himself) it’s possible that you opened up your daily paper and saw the following four-panel comic from Calvin and Hobbes: 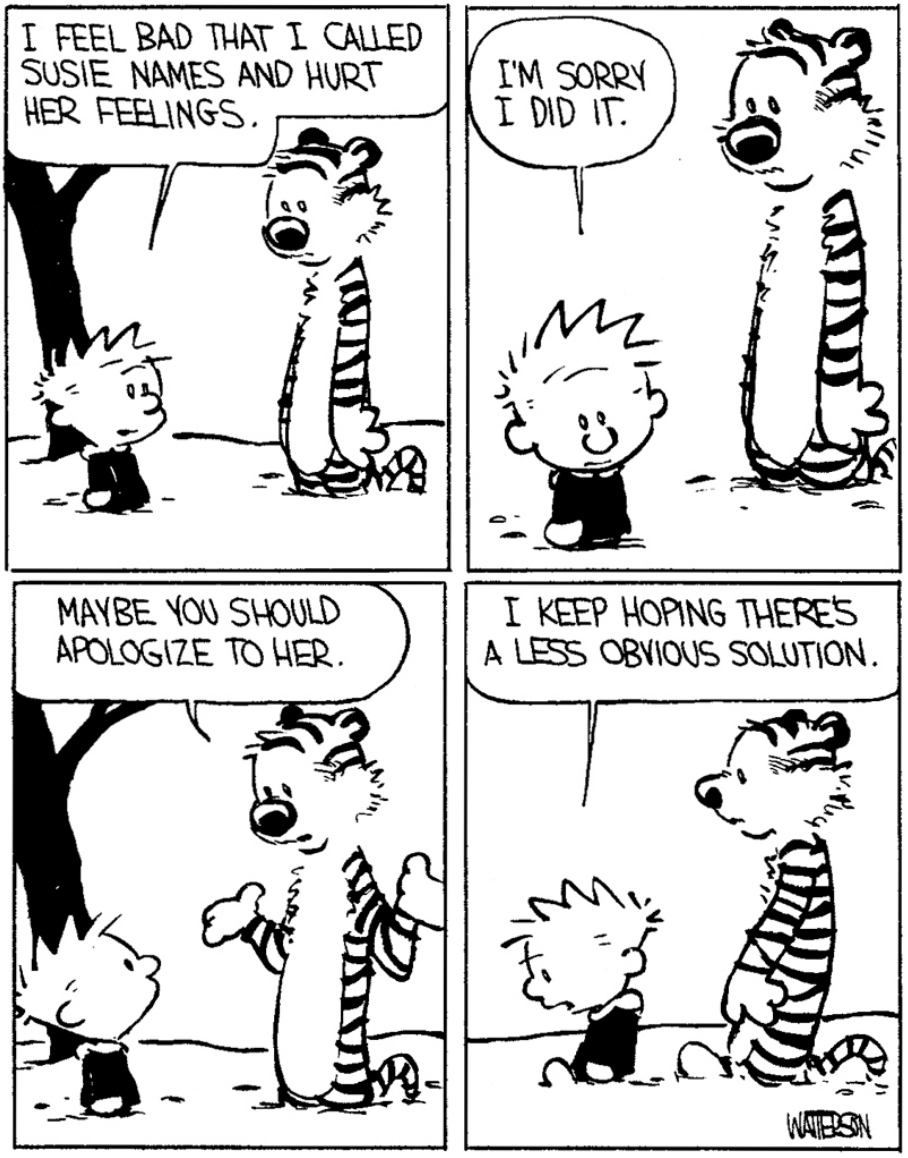 For anyone with eyes to see and ears to hear, it’s abundantly clear what the right thing for Calvin to do is: he needs to go and apologize to Susie. Calvin, however, is hesitant to do so. In fact, he’s looking to do anything BUT apologize.

The reason this comic is both funny and unfunny at the same time, is that it’s shining a light not on how children behave but on how adults behave!

After all, remember back to when you were little. If you were raised by even semi-competent adults, then when they got wind that you had hurt someone – emotionally, physically, etc. – they would immediately make you go and say I’m sorry to the person that you wronged. If you were raised by fully competent adults, they would also listen in on that apology to make sure that it was an actual apology and not a non-apology apology like: I’m sorry you’re such a whiner and had to go tattle on me.

When we were little, we knew that Hobbes was right! The very best thing we can do when we hurt someone is to go, say sorry, and then not do it again. 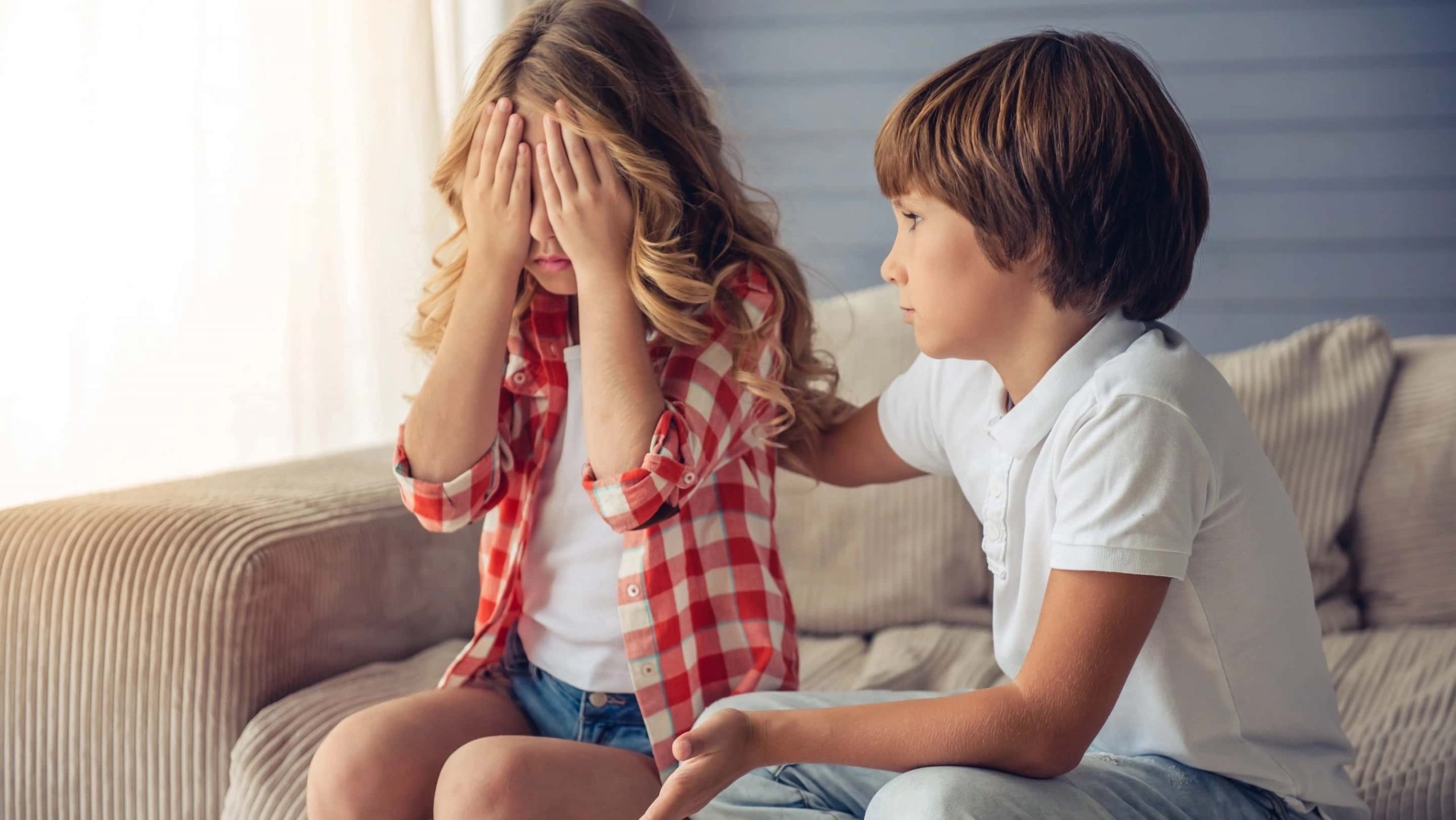 As children we’re taught that apologizing is the best thing for us to do when we’ve hurt someone.

Adults… Not So Much

But then, we got a little older. Our capacity for logic and reasoning expanded. As did our ability to rationalize our bad behavior and weasel out of making amends with those we have wronged.

This is true to the extent that when we adults hurt others we are far more likely to blame the person that we hurt than we are to offer that person an apology.  Just like Calvin, we want to do absolutely anything but simply own up to when we hurt the people around us.

That is a far, far cry from what we were taught as children. And, as it turns out, it’s an even further cry from how Jesus hoped his followers would live their lives. 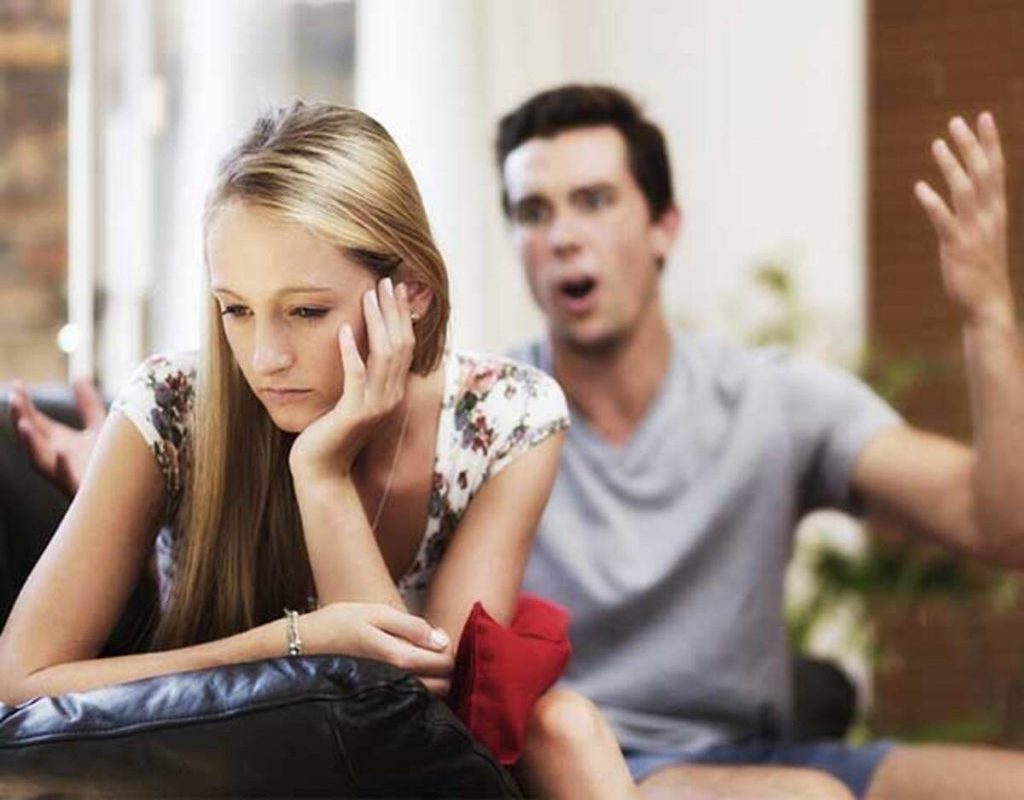 Most adults would rather yell and blame (and do pretty much anything else) than apologize.

Chapter 9 of the Gospel of Mark contains a rather shocking passage in which Jesus says to this disciples:

Startling though these verses are, don’t worry: Jesus isn’t suggesting that we maim ourselves for the glory of God. Rather, he’s using hyperbole to emphasize the need for his followers to lead lives of radical self-honesty.

In this passage, Jesus is commending to us a way of life in which we are able to really look at ourselves with radical, unflinching honesty. And when we see something within us that falls short of the standard of love, don’t lie about it, don’t rationalize it, don’t defend it, don’t equivocate about it. No! Just admit it, and then take bold and decisive action to change it (preferably, before it gets to a point where you have no better alternative but to chop off an appendage).

In other words, if you hurt someone, don’t be like Calvin. Don’t hem and haw and rationalize your awful behavior. Instead, take a cue from both Hobbes and Jesus:  say I’m sorry and then do the work you need to do to not make that same mistake again!

No More Than You Are

There is no need to pretend to be any more than you are.

How a little love transformed the gang capital of the world.

Harvard undergrads are a case study in the difference between wisdom and intelligence.