The big impact of a smalltime Russian priest.

On 24th of February, 2022, the Russian military invaded the sovereign nation of Ukraine. As of the writing of this piece it is estimated that some 30 thousand Ukrainians have lost their lives because of it.

Within its own borders the Russian government has been doing everything in its power to suppress public dissent against this war. In March of 2022, they passed some fairly draconian laws criminalizing any public opposition to it. They even made it illegal to call the war a war. 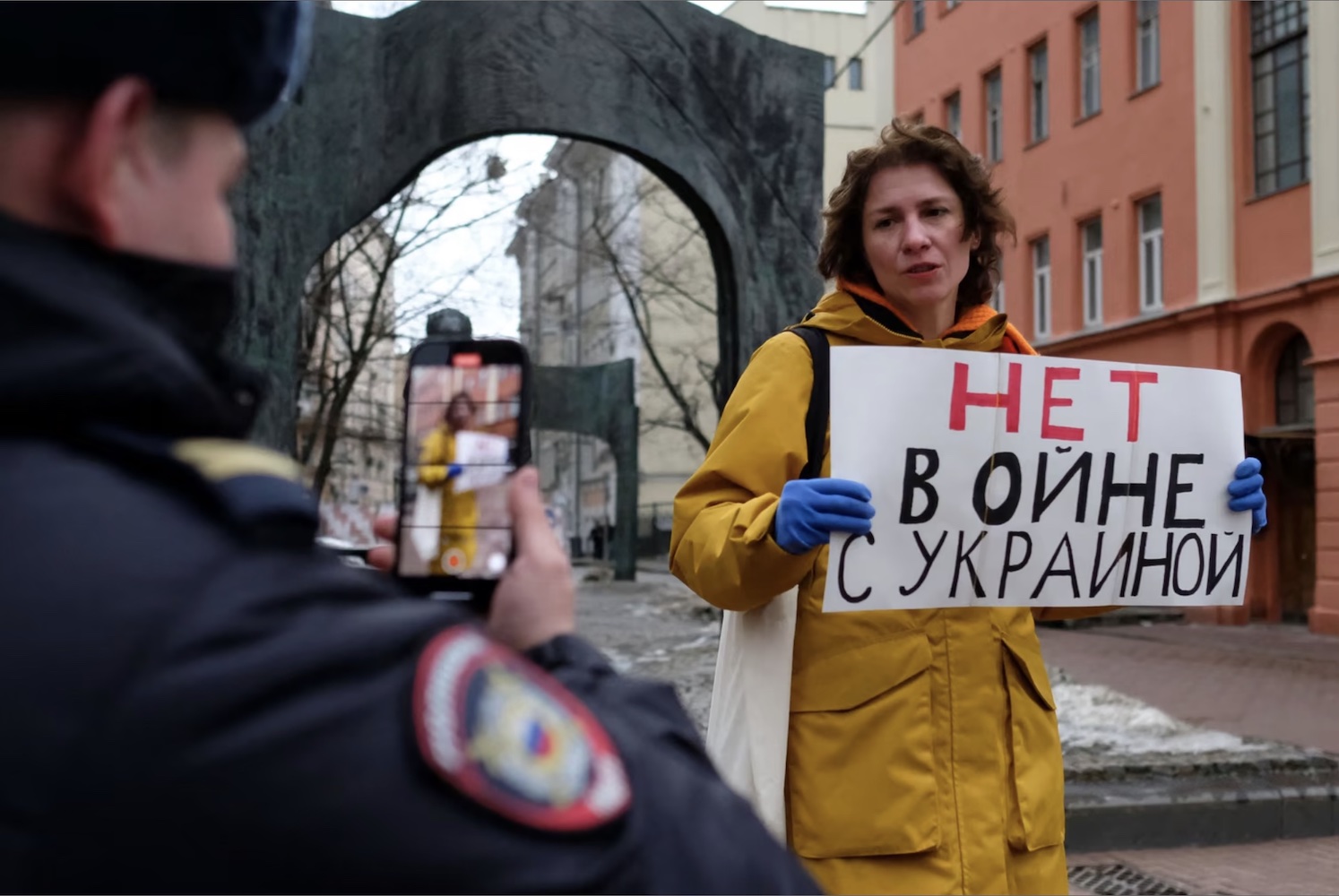 From The Atlantic – A police officer uses his smartphone to film a woman staging a protest with a placard reading “No to war with Ukraine” in Moscow, on February 23, 2022.

What’s more, the Russian government has been doing all these things with the spiritual stamp of approval from the head of the Russian Orthodox church, a guy by the name Kyrill. His full title is Patriarch Kryill of Mosow.

It’s important to note, that not only is Kyrill a longtime supporter of Vladimir Putin, but also that Forbes magazine estimates his net worth at over 4 billion dollars. Which is to say, priest though his, spiritual leader of some 100 million Christians though he is, he’s not exactly hankering to see God’s kingdom come to earth – he’s heavily invested in the status quo.

Throughout this conflict Kyrill has offered his blessing and encouragement to the Russian army, going so far as to tell soldiers that if they die in military service that their sins will be washed away and they will be with God in glory for eternity. 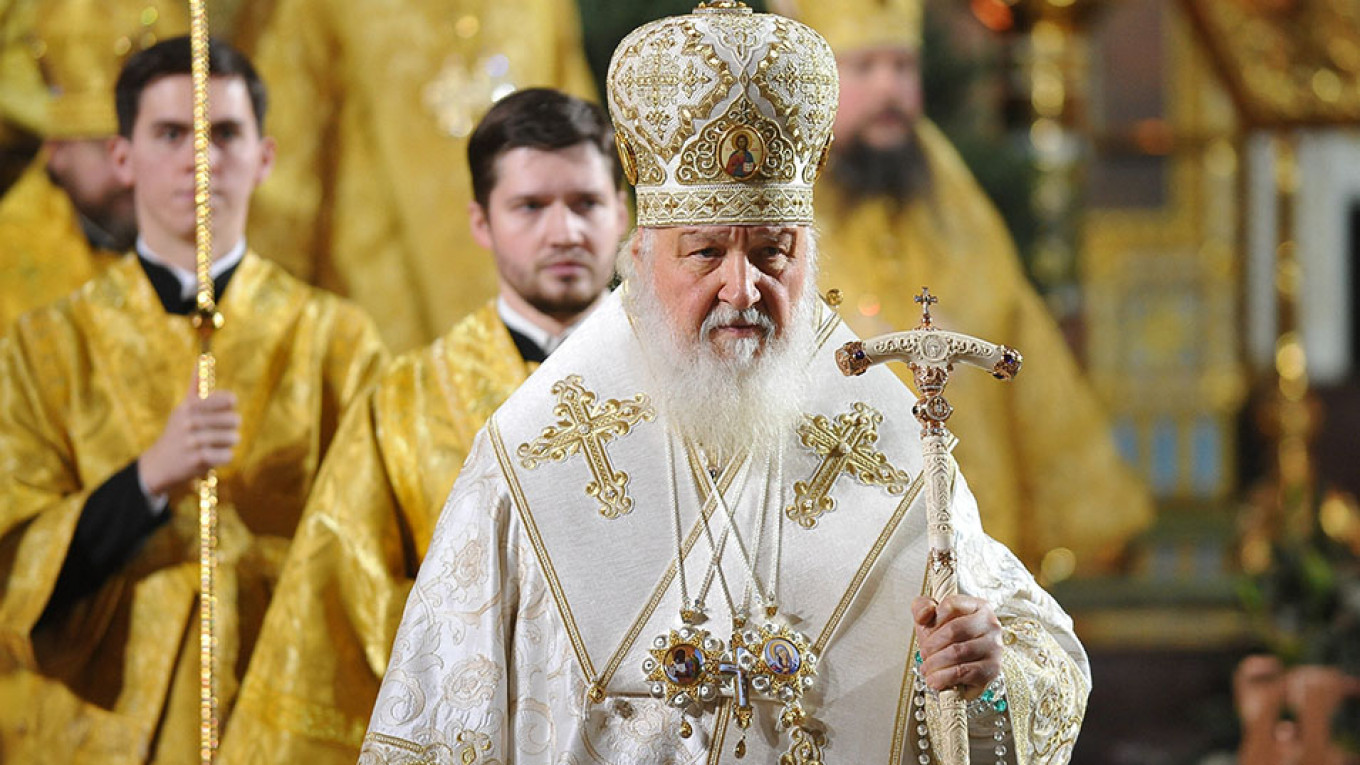 From the Moscow Times – Patriarch Kyrill, the head of the Russian Orthodox Church, billionaire, and super snazzy dresser.

Despite Putin’s harsh censorship laws, news of the Russian Army’s massacres and other war crimes managed to trickle their way back into Russia. And as they did, they found their way back to one Father Ioann Burdin, a Russian Orthodox priest of a tiny, remote parish on an island off the northeast coast of Russia.

Father Burdin grew greatly distressed by what he hearing. There was no doubt in his mind that the actions of his country and his countrymen were antithetical to everything he believed as a Christian.

And so on Sunday, March 6th, Father Burdin put on his vestments, stood before just a handful parishioners, and he said these words as part of his sermon:

Russian soldiers are killing their brothers and sisters in Christ. We Christians cannot stand on the sidelines while brother kills brother, Christian kills Christian. We cannot bashfully close our eyes. We cannot call black white. The blood of Ukrainians is not only on the hands of the leaders of the Russian federation and the soldiers who carry out their orders. Their blood is on the hands of each of us who approve this or stand silent.

Father Burdin then finished up the service like any other Sunday. The congregation dispersed. 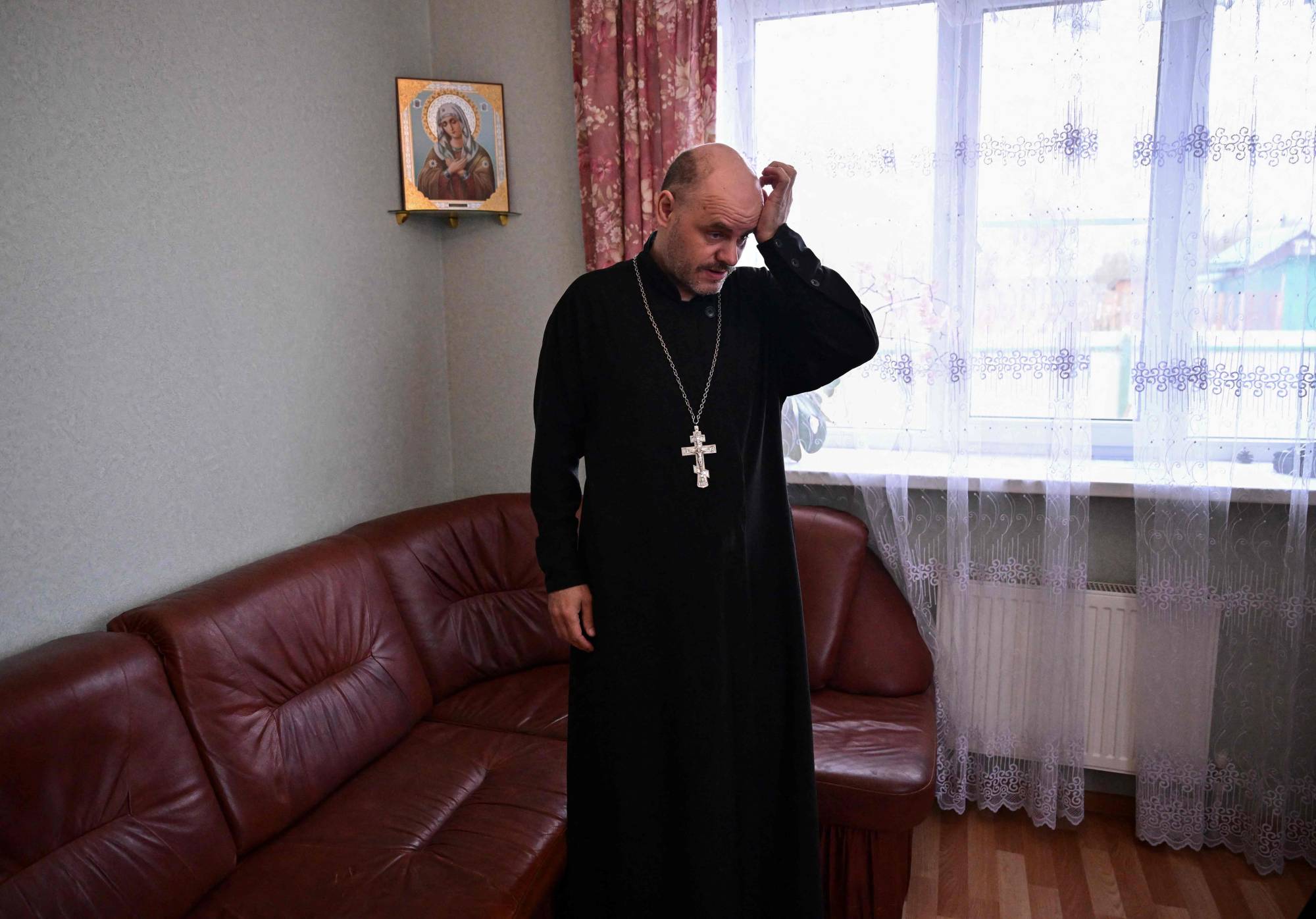 From The Japan Times – Father Ioann Burdin, not nearly so snazzy a dresser as his billionaire boss.

A few hours later though, Father Burdin received a call. It was the police. They wanted a word with him down at the station. Father Burdin went.

For the next 4 or 5 hours, he was interrogated, badgered, and threatened. Having trained in the methods of Soviet dissidents,  Father Burdin didn’t crack. He admitted to no wrongdoing and was eventually let go.

Several days later, however, he was brought to trial for violating those new censorship laws. Specifically, he was charged with discrediting the Russian military. The trial was quite the show. If the stakes weren’t so high it would have been downright hilarious.

Several of Father Burdin’s parishioners were called to testify against him. One witness said she was almost deaf and had a horrible memory so she had nothing tell the court. Two others testified that they were busy praying that they hadn’t heard a darn thing that he said!

Despite the lack of evidence, Father Burdin was found guilty. 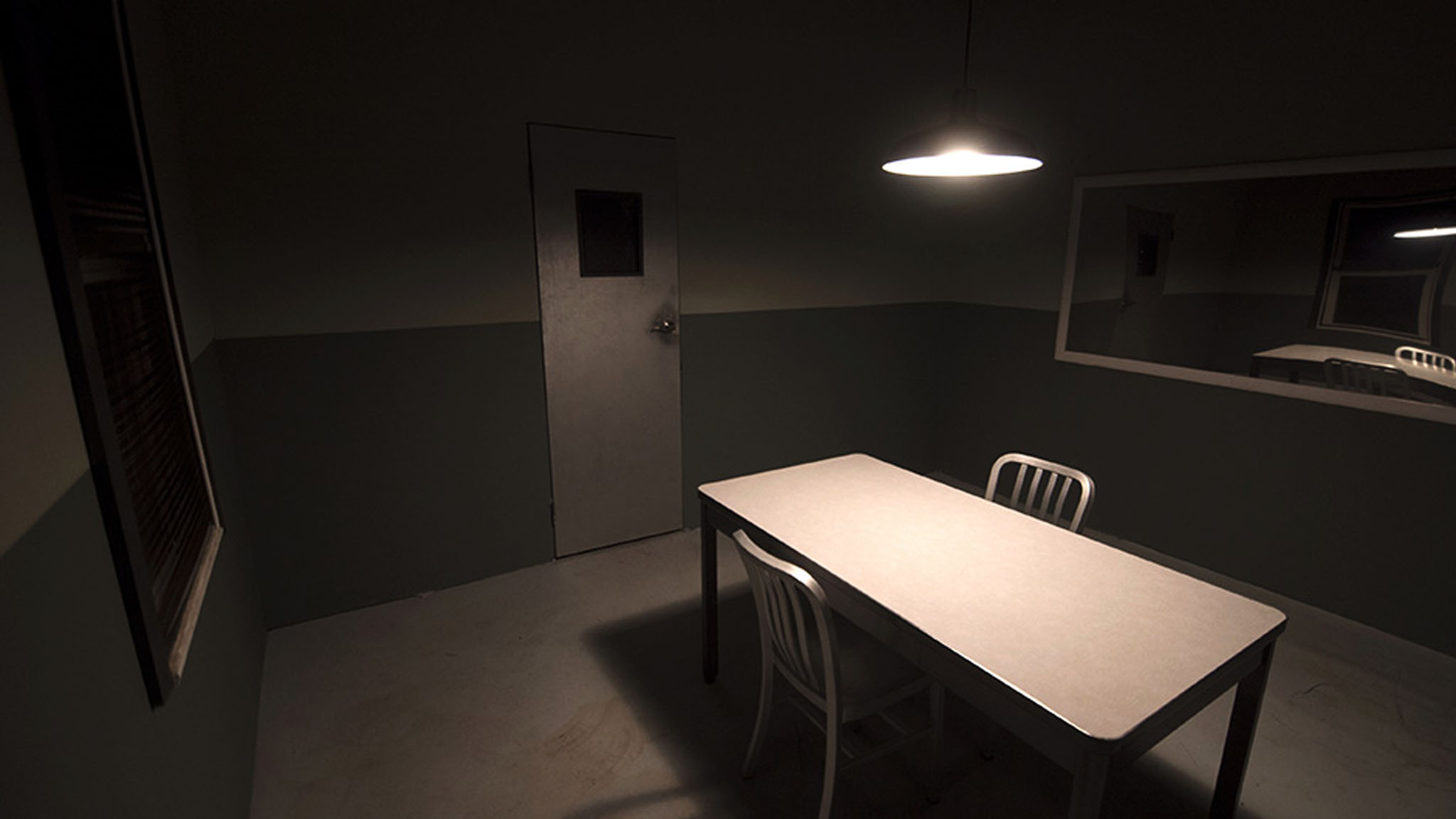 From SoFlo Studio – Father Burdin found himself interrogated and threatened for hours.

While he managed to dodge prison, Father Burdin was fined 273 dollars. That might not sound like much but that’s over one month of his salary. Do it again, he was told, and you’ll be looking at up to 15 years in prison.

Shortly thereafter, a petition began to circulate among local residents asking for his removal from the parish. At that point, Father Burdin decided he could no longer be effective in ministry there. So in early April, he resigned from his parish. The powers that be in the Russian Orthodox Church gave him a few months to find another parish or else risk being defrocked.

So here is this little nobody pastor of a tiny little flyspeck of church in the boondocks of Russia. And for simply standing up and articulating the basic tenets of the Christian faith – that as Christians we cannot support violence against our neighbors – he had the full weight of the Russian Government and the Russian Orthodox Church coming crashing down on him. 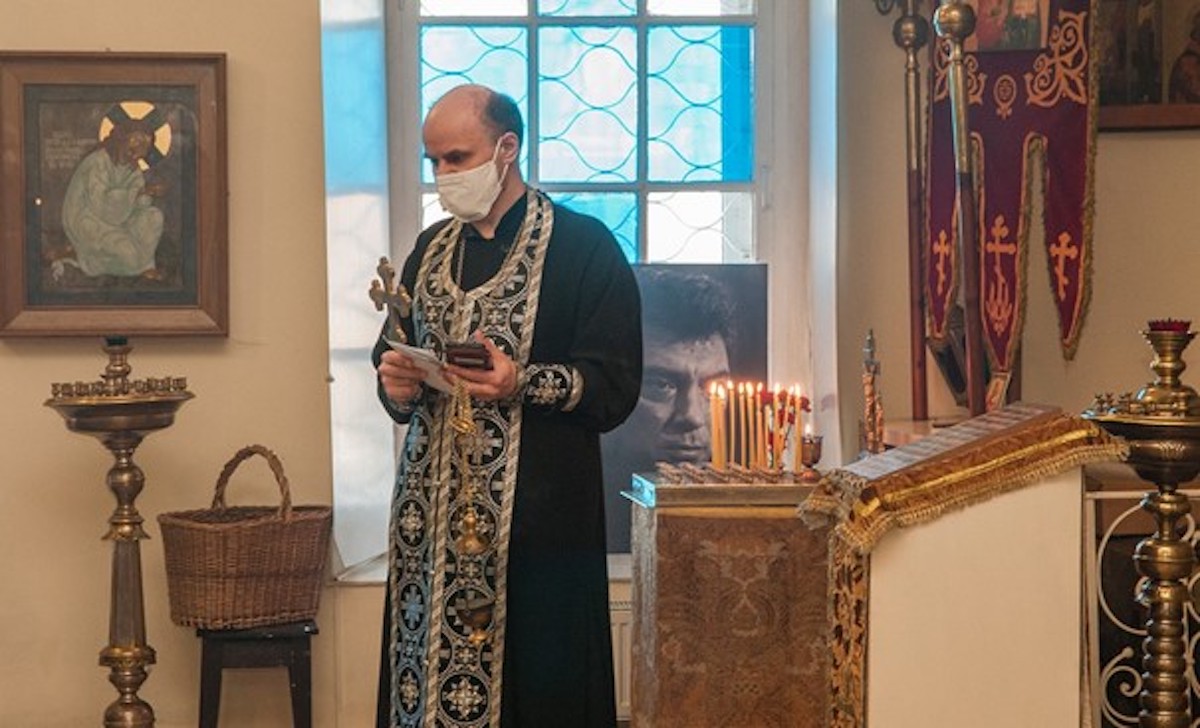 All of a sudden, Jesus’ confounding words from Chapter 12 of the Gospel of Luke begin to make sense: Do you think that I have come to bring peace to the earth? No, I tell you, but rather division!

It’s not that Jesus was promoting violence. Rather, it’s that the Kingdom of God that he came to establish is a threat to the current world order because it exposes how just weak and corrupt and violent it really is. That’s why the Russian government will go out of its way to prevent even the priest of a tiny church speaking from out against it.

What should give us hope that the current world order will someday give way fully to the “peace on earth” of which angels sang when Jesus was born is this:

The original audience for Father Burdin’s message of peace, by his own estimates, was about 30 people. 10 people who were at church when he preached and about 20 people who saw it posted on the church’s website. That’s it.

But once the story got out about the Putin regime’s attempts to suppress his message, it got picked up by news outlets across the globe. Father Burdin’s message of peace has now been translated into tens of languages and heard by MILLION and MILLIONS and MILLIONS of people across the globe.

Peace might not win the battle, but peace will win the war!

God has a habit of soaking in bad and turning it to good.

Two pastors. Two approaches to other faiths. Which got it right?

The Amazing Story of Bill Wilson

Abandoned as a child, Bill Wilson set out to help other children know they're loved.