Genealogies: the Resumé of the Ancient World

The New Testament makes much to-do about the genealogy of Jesus. That’s because Genealogies were the resumés of the ancient world!

First-century Palestinian society was not an individualistic society like ours. They were less concerned about what you had personally accomplished in your life and they more concerned about where you came from. It was believed that that would be truly indicative of the type of person you would turn out to be.

And so, what we do to our resumés today – highlight what in our work history we’re proud of and hide what we’re not – people in ancient times did to their genealogies.

For example, the villainous King Herod burned the public register of his family’s genealogy in order to hide his humble origins. He then spent the rest of his days writing and revising a new, more impressive genealogy for himself. If ever an ancestor was found to be a scandal, that unsightly branch of the family tree was simply lobbed off. 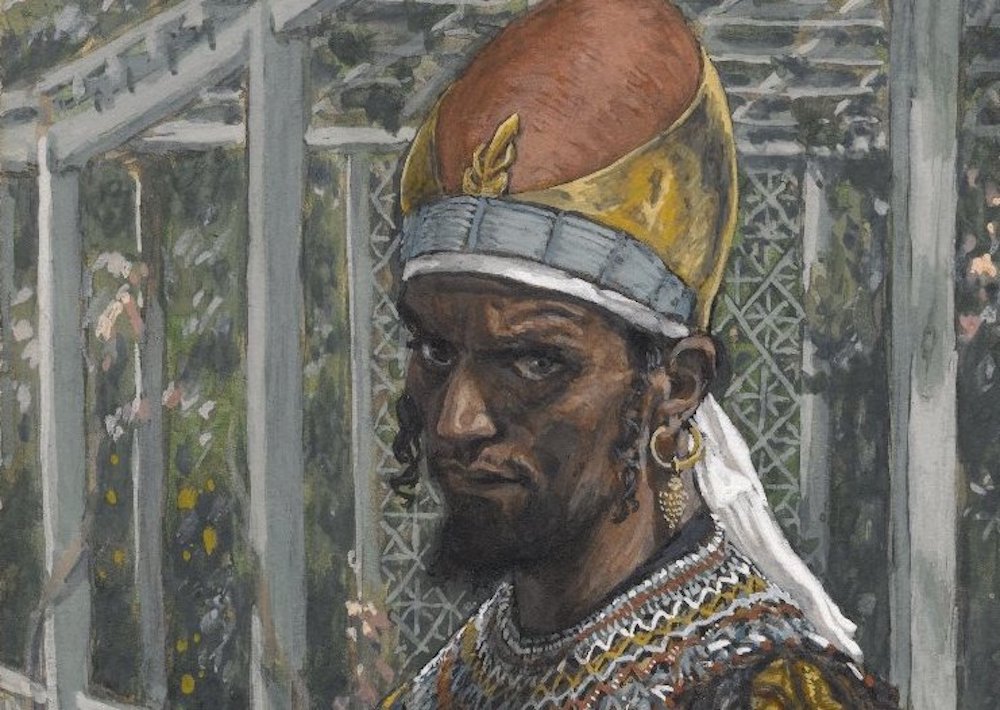 A depiction of King Herod by artist James Tissot. Herod is pictured scowling, presumably at a cousin he is about to cut out of his family tree.

The Genealogy of Jesus in Matthew, Chapter 1

Given the importance of genealogies in the ancient world, it’s no surprise that the gospel writer Matthew opens his book with a genealogy of Jesus. It’s a way of establishing Jesus’ bonafides. And as far as genealogies go, the one that Matthew lays out is ridiculously impressive. It reads like a who’s who of the Old Testament.

Read Jesus' Genealogy from the Gospel of Matthew

This is a record of the ancestors of Jesus the Messiah, a descendant of David and of Abraham:

For all the impressive names that appear in it, the crowning glory of Jesus’ genealogy is surely King David. If ever there was a person that a 1st-century Palestinian Jew would want to claim in their lineage it would be David!

David was revered as Israel’s greatest king. His reign ushered great prosperity into the region. He united the tribes of Israel into a single kingdom. He re-conquered Jerusalem from the Philistines  and established it as his capital. He defeated enemy armies right and left. And, notably, David never strayed into idolatry as did most every other king that came after him.

Having King David in your lineage would be the modern day equivalent of getting to list Jesus as a personal reference on your resumé! 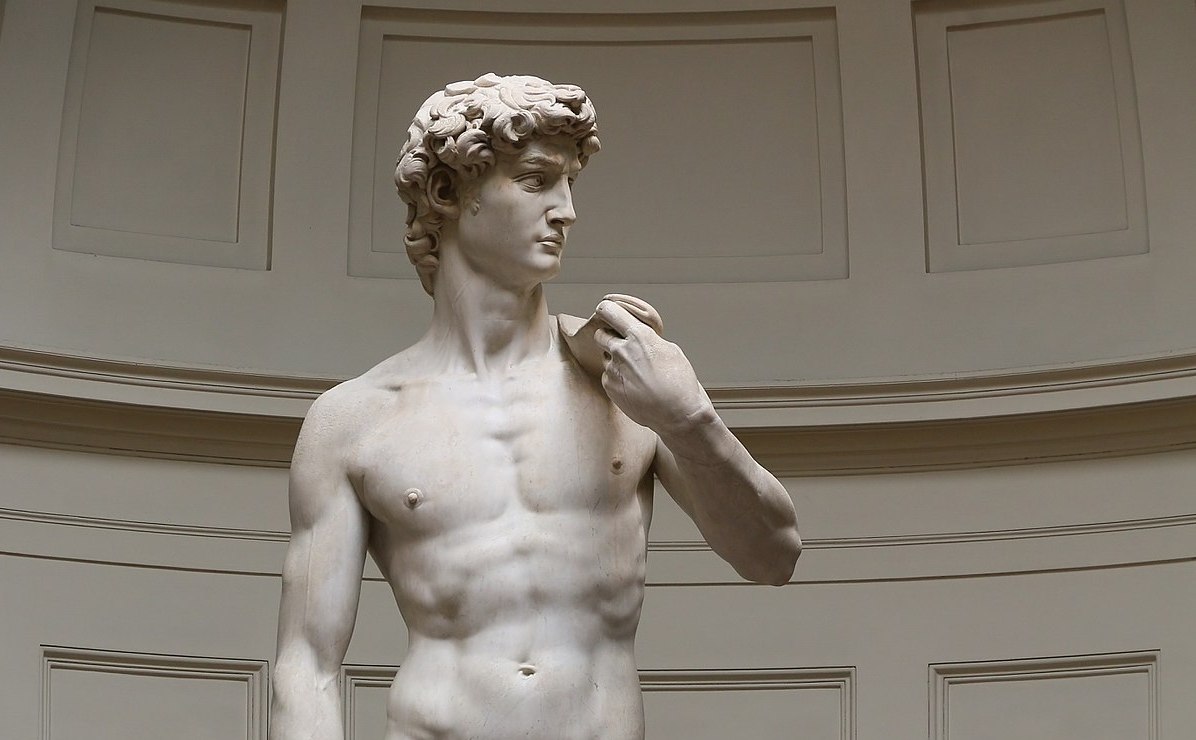 King David was a very prestigious name to have in your genealogy. Also, his were great genes to inherit – look at those sick abs!

The Scandals in Jesus’ Genealogy

Right alongside the prestigious name of King David, however, we find other names. Names that we would normally expect to be lobbed off of a family tree for the sake of propriety. Scandalous names like Tamar, Rahab, Ruth, and Bathsheba.

Not only are these the names of women (who were not included in genealogies at at all because they lacked social status) but these particular women had backgrounds that would detract from the sparkling prestige of this genealogy in a big way. Tamar dressed up as a prostitute in order to seduce her dead husband’s brother. Rahab was an actual prostitute. Ruth was a foreigner from the land of Moab. Bathsheba had an adulterous affair with King David.

And yet, here in the very beginning of the Gospel of Matthew, we find Jesus proudly claiming Tamar, Rahab, Ruth, and Bathsheba as family. 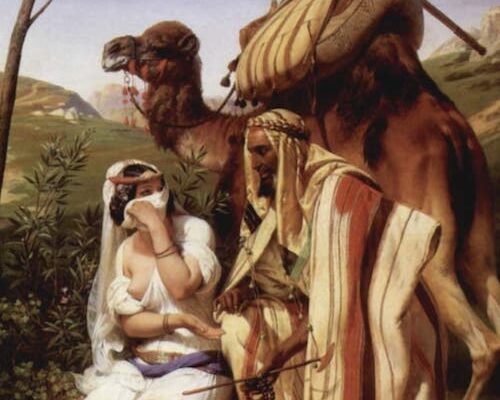 Tamar and Judah by Horace Vernet 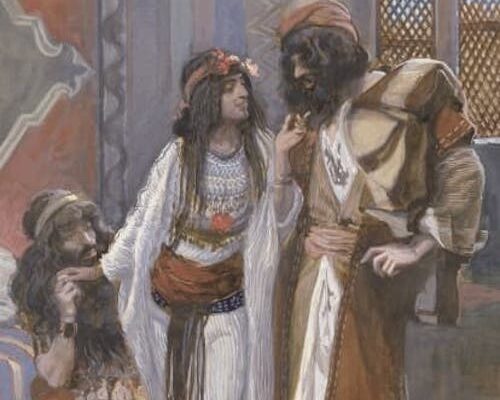 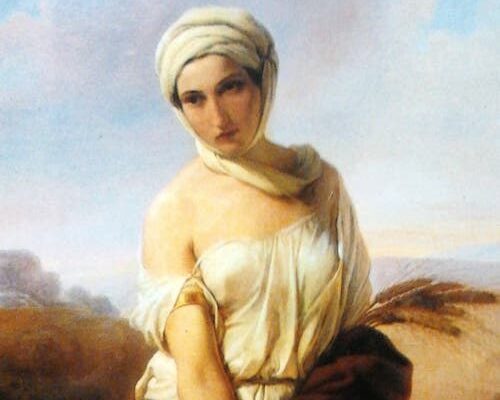 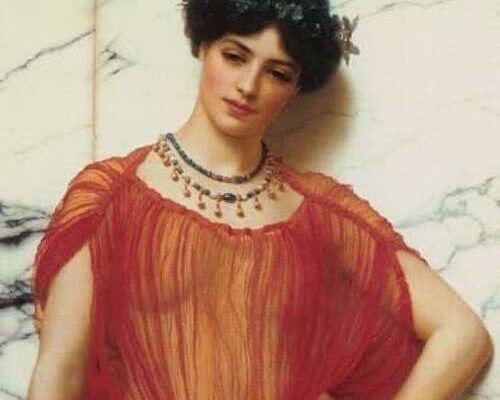 If you took the time to read Jesus’ genealogy from the Gospel of Matthew above, you may have noticed something: Bathsheba’s name isn’t actually listed! Instead, she is referred to solely as “the wife of Uriah.” Here’s how the line from Matthew 1:6 reads:

David was the father of Solomon (whose mother was the wife of Uriah).

In other words, Jesus’ genealogy goes out of its way to point to the very scandalous fact that Bathsheba was the wife of a man other than King David (specifically a man named Uriah the Hittite).

So even as this genealogy drops the illustrious name of King David, by referring to Bathsheba as “the wife of Uriah,” it is simultaneously reminding us of the very worst things that King David ever did.

In the spring of the year, when kings normally go out to war, David sent Joab and the Israelite army to fight the Ammonites. They destroyed the Ammonite army and laid siege to the city of Rabbah. However, David stayed behind in Jerusalem.

Late one afternoon, after his midday rest, David got out of bed and was walking on the roof of the palace. As he looked out over the city, he noticed a woman of unusual beauty taking a bath. He sent someone to find out who she was, and he was told, “She is Bathsheba, the daughter of Eliam and the wife of Uriah the Hittite.” Then David sent messengers to get her; and when she came to the palace, he slept with her. She had just completed the purification rites after having her menstrual period. Then she returned home. Later, when Bathsheba discovered that she was pregnant, she sent David a message, saying, “I’m pregnant.”

Then David sent word to Joab: “Send me Uriah the Hittite.” So Joab sent him to David. When Uriah arrived, David asked him how Joab and the army were getting along and how the war was progressing. Then he told Uriah, “Go on home and relax.” David even sent a gift to Uriah after he had left the palace. But Uriah didn’t go home. He slept that night at the palace entrance with the king’s palace guard.

When David heard that Uriah had not gone home, he summoned him and asked, “What’s the matter? Why didn’t you go home last night after being away for so long?”

Uriah replied, “The Ark and the armies of Israel and Judah are living in tents, and Joab and my master’s men are camping in the open fields. How could I go home to wine and dine and sleep with my wife? I swear that I would never do such a thing.”

“Well, stay here today,” David told him, “and tomorrow you may return to the army.” So Uriah stayed in Jerusalem that day and the next. Then David invited him to dinner and got him drunk. But even then he couldn’t get Uriah to go home to his wife. Again he slept at the palace entrance with the king’s palace guard.

So the next morning David wrote a letter to Joab and gave it to Uriah to deliver. The letter instructed Joab, “Station Uriah on the front lines where the battle is fiercest. Then pull back so that he will be killed.” So Joab assigned Uriah to a spot close to the city wall where he knew the enemy’s strongest men were fighting. And when the enemy soldiers came out of the city to fight, Uriah the Hittite was killed along with several other Israelite soldiers.

Then Joab sent a battle report to David. He told his messenger, “Report all the news of the battle to the king. But he might get angry and ask, ‘Why did the troops go so close to the city? Didn’t they know there would be shooting from the walls? Wasn’t Abimelech son of Gideon killed at Thebez by a woman who threw a millstone down on him from the wall? Why would you get so close to the wall?’ Then tell him, ‘Uriah the Hittite was killed, too.’”

So the messenger went to Jerusalem and gave a complete report to David. “The enemy came out against us in the open fields,” he said. “And as we chased them back to the city gate, the archers on the wall shot arrows at us. Some of the king’s men were killed, including Uriah the Hittite.”

“Well, tell Joab not to be discouraged,” David said. “The sword devours this one today and that one tomorrow! Fight harder next time, and conquer the city!”

When Uriah’s wife heard that her husband was dead, she mourned for him. When the period of mourning was over, David sent for her and brought her to the palace, and she became one of his wives. Then she gave birth to a son. But the Lord was displeased with what David had done.

The question then is: WHY IN THE WORLD would Matthew include this detail!?!? Isn’t this genealogy supposed to be about making Jesus look as good as possible? Why even include mention of Bathsheba and these other women at all? 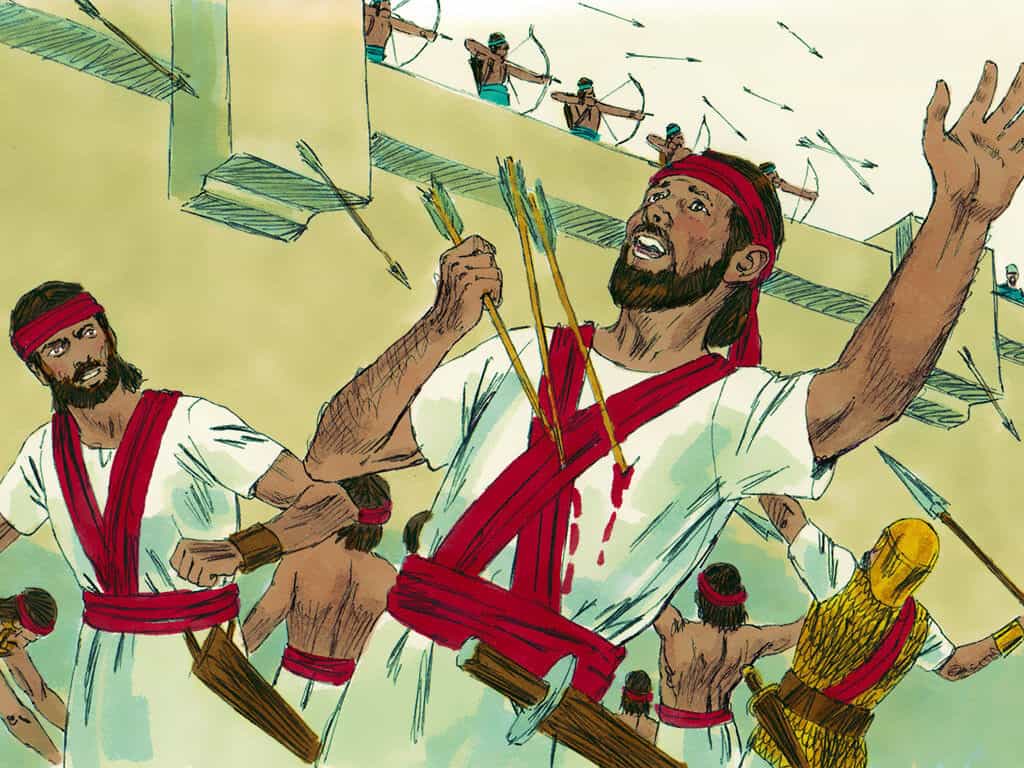 The murder of Uriah the Hittite – “Et tu, David?”

What we find going on in the genealogy of Jesus is a great leveling.

Unlike other genealogies of his day, Jesus’ doesn’t hide away certain, potentially embarrassing ancestors while putting other, more prestigious ancestors in bold, italic, 54-point font. Rather, in Jesus’ genealogy, mighty kings like David are brought down and women like Bathsheba with no power, privilege, or prestige are raised up. Their names appear side by side!

Put another way: for Jesus, there is no distinction between a heralded King of Israel and a lowly Canaanite prostitute. At the end of the day, everyone – even and especially David –  has fallen short of the glory of God.

At the very same time though, as messed up, as imperfect, as broken, as sinful, as lacking in prestige, as [fill in you own adjective] as these people may be, here they are being included in Jesus’ genealogy!

As you know if you’ve ever made a resumé: you don’t include things on it that you’re not proud of. Jesus proudly claims both Bathsheba and King David as family. 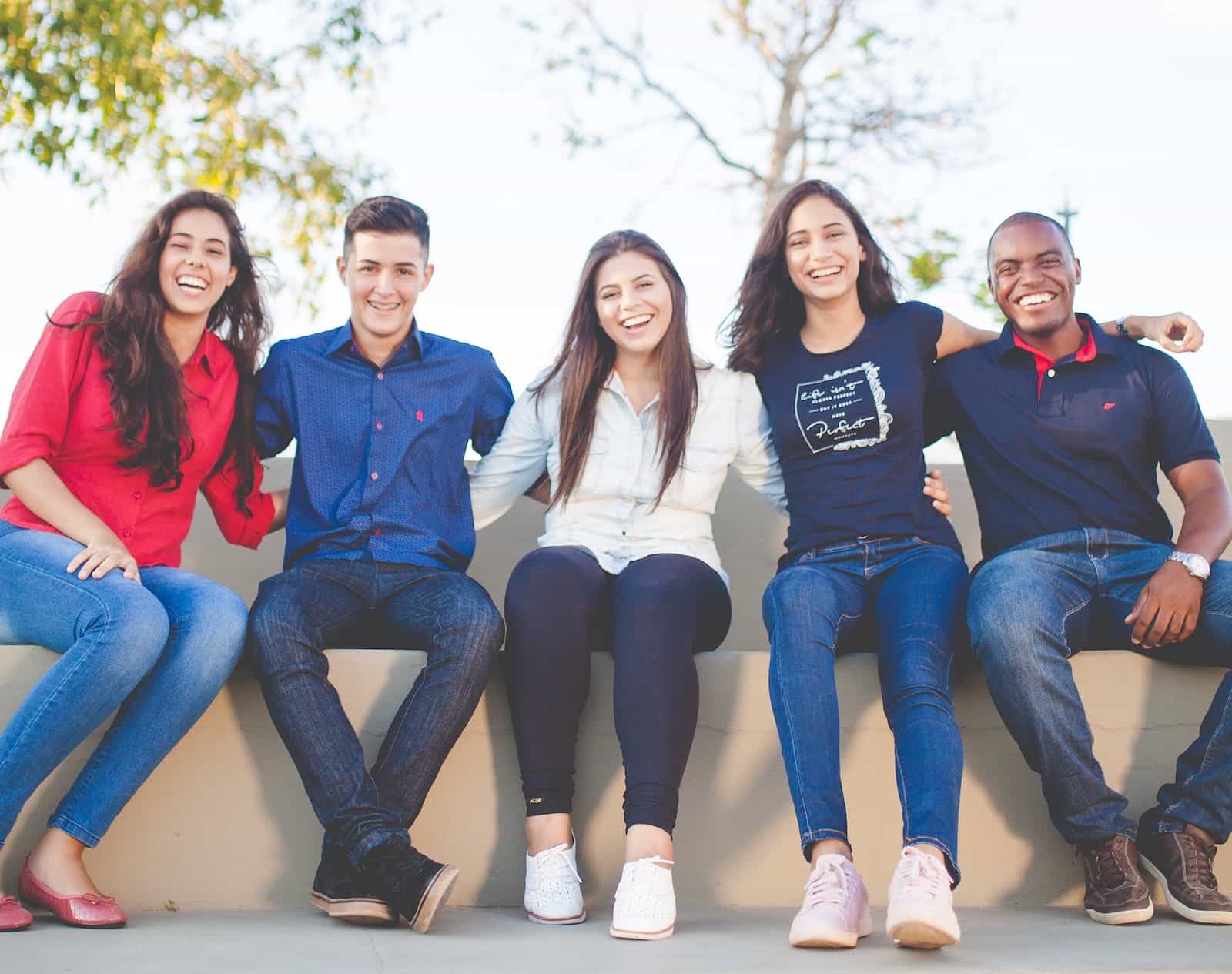 We are part of God’s family now too!

And the good news for us?

As Paul reminds us in Hebrews, Chapter 2, Jesus is not ashamed to call US brothers and sisters. Which means that we’re not just inheritors of this genealogy but that OUR NAMES now appear on it. And you need to know: like us, God doesn’t put anything on his resumé that he ain’t proud of!

May you be blessed by the knowledge that you are claimed as a beloved member of God’s own family.

Want to learn more about Bathsheba and other notorious women in scripture? Check our our Bad Girls of the Bible sermons series.

Edwin Landseer had a penchant for transforming blemishes into masterpieces. So does God!

Not sure what to do in this uncertain moment? Take a (prophetic) nap!