What does it mean to “feed someone with a long-handled spoon”?

“Feed someone with a long-handled spoon” is a figurative expression  in American English that means to exercise caution while dealing with someone who is liable to hurt you.

The picture this expression paints is a vivid one. Imagine yourself dealing with someone so nasty, so vicious, that you have to use a spoon with a handle long enough to stay out of biting range in order to feed them.

Where does this expression come from?

The origins of this expression are quite old. It appears to be variation of an Old English proverb that, according to Brewer’s Dictionary of Phrase and Fable, is first documented in the 1300s in Chaucer’s Canterbury’s Tales:

He needs a long spoon who sups with the Devil.

This proverb is later alluded to by no less than Shakespeare himself! Shakespeare references it both in his Comedy of Errors and The Tempest. Here’s how it appears in The Tempest:

STEPHANO: Four legs and two voices—a most delicate monster. His forward voice now is to speak well of his friend. His backward voice is to utter foul speeches and to detract…. Mercy, mercy! This is a devil, and no monster. I will leave him. I have no long spoon.

How precisely this proverb evolved into the contemporary expression “feed someone with a long-handled spoon” is unclear. Because its use is primarily among African Americans in the southern United States, it seems likely that the current form of this expression came into being in the Antebellum South.

What’s an example of this expression in use?

Throughout the early 2000s Paula Deen was the Food Network’s queen of comfort-food. She had several popular shows about Southern cooking. She released several cookbooks.  She even had her own line of kitchen products!

In 2013, however, Paula experienced a steep fall from grace after admitting that she used the ‘N’ word to talk about her employees in a social media post. When the media caught wind of this confession, it took just a few short days for Deen to lose everything. Her television shows on the Food Network were canceled. Her publisher scuttled plans for a new cookbook. Target and Walmart removed her products from their stores.

Now, you may well say that this story is simply one of a nasty, racist woman getting her just desserts. I’d be inclined to agree. In fact, I wouldn’t even call her memory to mind were it not for a story that surfaced in the wake of all her nastiness.

Looking to get the real scoop on Deen, The New York Times interviewed a woman by the name of Dora Charles. Ms. Charles is self-described as Deen’s longtime friend and “soul sister.” She worked alongside Deen in Deen’s restaurant for many lean years before Deen’s celebrity took off. 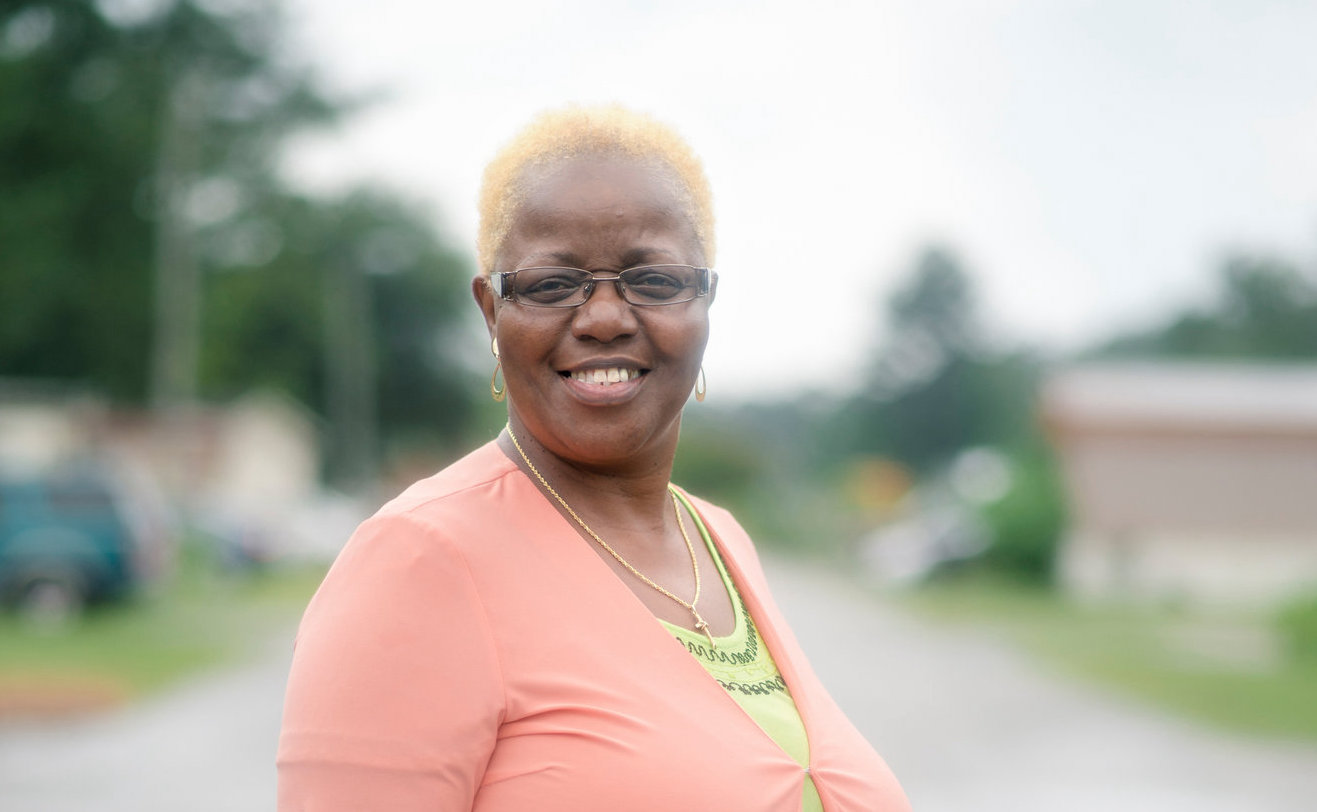 Paula Deen reportedly promised Ms. Charles, whose recipes and good taste were pivotol to her restaurant’s success, that she would take care of her if she ever made it big. Long story short: Paula Deen – whose net-worth rocketed to somewhere around $17 million – did not make good on that promise.

Ms. Charles was not part of the lawsuit that ultimately caused the collapse of Paula Deen’s media empire. Nor was she seeking any compensation for the wrongs that Deen had done her in the past. Rather, her interview with the Times betrayed a simple sense of sadness that things had turned out the way they did. Commenting on the status of her relationship with Paula Deen, Ms. Charles had these profound words to say:

“I still have to be her friend if I’m God’s child. I might feed her with a long-handled spoon, but, yeah, I’m still her friend.”

How does this expression relate to the Parable of the Spoons?

The short answer:
It doesn’t!

The longer answer:
The “Parable of Spoons” is not one of the parables of Jesus that we find in the Bible. Rather, it’s a famous Jewish teaching attributed to the Lithuanian Rabbi Haim of Romshishok. Rabbi Haim was an itinerant preacher who reportedly used this parable to begin his talks whenever he entered a new village. This is how author Jonathan Bernis describes the parable in his book A Rabbi Looks at the Afterlife:

I once ascended to the firmaments. First went to see hell and the sight was horrifying. Row after row of tables were laden with platters of sumptuous food, yet the people seated around the tables were pale and emaciated, moaning in hunger.

As I came closer, I understood their predicament. Every person held a full spoon, but both arms were splinted with wooden slats so he could not bend either elbow to bring the food to his mouth. It broke my heart to hear the tortured groans of these poor people as they held their food so near but could not consume it. 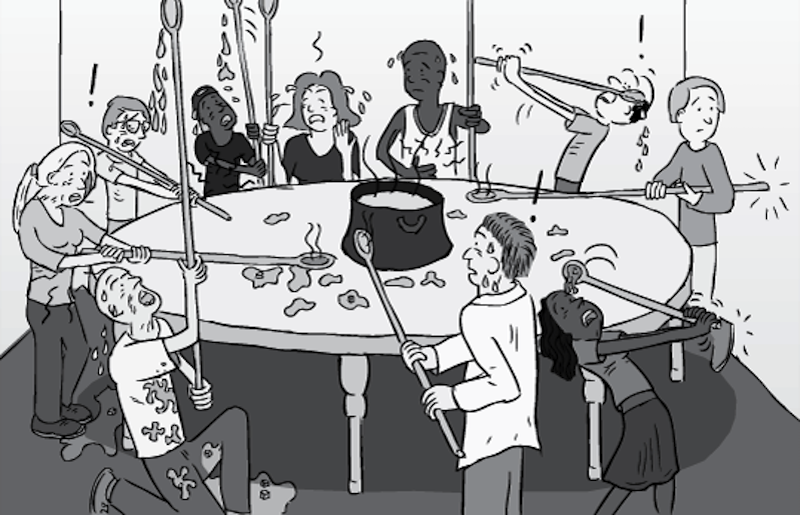 Next I went to visit heaven. I was surprised to see the same setting I had witnessed in hell: row after row of long tables laden with food. But in contrast to hell, the people here in heaven were sitting contentedly talking with each other, obviously sated from their sumptuous meal. As I came closer, I was amazed to discover that here, too, each person had his arms splinted on wooden slats that prevented him from bending his elbows. How, then, did they manage to eat?

As I watched, a man picked up his spoon and dug it into the dish before him. Then he stretched across the table and fed the person across from him! The recipient of this kindness thanked him and returned the favor by leaning across the table to feed his benefactor – I suddenly understood.

Heaven and hell had the same circumstances and conditions. The critical difference is in the way the people treat each other. 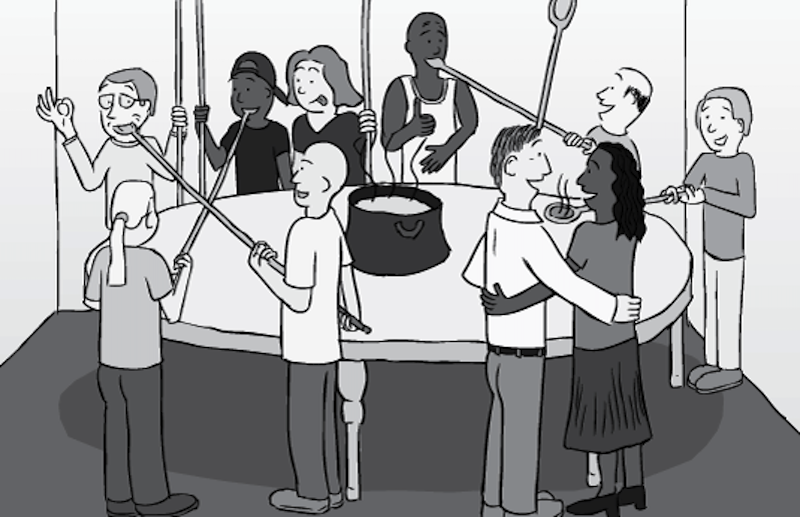 The message of this parable is clear: We suffer when think only of ourselves. We thrive when we work together.

One Thing We Can Agree On

When you’re butting heads with someone, here’s one thing you can agree on!

A little song with a lot to teach us about becoming more loving.

Greed has a way of sneaking into our lives without our ever noticing.